Pats' Pub on Simpliengineering not quite as private as on Eng-tips (?)

If I google Ahmaud Arbery site:eng-tips.com, it takes me nowhere, even though there is a thread by that title on Pats’ Pub at eng-tips. This applies even when I am logged into eng-tips.com on my browser.

Btw I’m not complaining about that, but it does temper my willingness to discuss potentially-controversial subjects given that public discussion of controversial subjects can come back to haunt you in unexpected ways. And I don’t take big comfort from my anonomized handle… a creepy stranger on the internet once showed me that he could correctly track down my identity from my handle (which was all the more impressive because there’s a lot of electricpetes out there who aren’t me). My conclusion is that it’s easy to unwittingly leave behind clues if you’re not careful. Going the other direction from name to handle is also possible depending on what breadcrumbs you have left on the internet.

You can call me paranoid, and I wouldn’t argue with you. But being the paranoid that I am, I’m a little less at ease discussing controversial subjects on simpliengineering Pats’ Pub knowing my posts are publicly accessible. That’s not necessarily a bad thing… it’s not like I need more controversy in my life.

Pete, you’re not paranoid enough. Don’t assume anonymity on Eng-Tips.
When you share something with over 400 persons, it may as well be public.
I made a comment in the Pub about some happenings in Central America.
The source of my information was a series of articles published in the Baltimore Sun.
I don’t know if it would have made a difference if I had directly quoted and attributed the information.
Probably not.
Remember the apostrophe hover to find the location of a poster?
For a couple of years afterward my location showed up as Virginia.
Why would some agency or Company in Virginia be intercepting my internet traffic?
It no longer happens.
Now I wonder;
Am I no longer under electronic surveillance?
Or
Has their software gotten better?
I also wonder;
Was this initiated by a Pub member?
or
Is Pub traffic monitored by some agency or Company?
If you put it on the net, anywhere, consider it public and available to agencies and Companies.
By the way, are e-mails still routed through the monitoring station in New Zealand?
Is that the only traffic routed through out-of-country monitoring stations?
Don’t worry, the general public can’t see your posting in the ET Pub unless someone copies and re-posts it.
Only the agencies and Companies who matter can access it directly.
Sorry to upset you my friend, but never forget that you are on the “NET”.
(BTW, Check the Spanish translation of the abbreviation for “Company”)

Yes, Pats’ Pub on SimpliEngineering is not an invite-only private group.

I was on the electric bulletin board systems (BBSs) back in the eighties. I made an ass of myself back then. When you logged in for the first time, you typically were warned that the sysops read all the messages, public and private. BBSs were not protected communications like the telephone system and the mails.

Anything you post anywhere on the internet is up there permanently, and out of your control. Don’t post dick pics.

I don’t see a problem with a carefully reasoned response to a political discussion. If someone is angry because you do not support QAnon, you don’t want to associate with them anyway.

Bill - thanks. Yeah, there is no doubt that governments and hackers have some scary access to our private lives.

Latexman - thanks for confirming my conclusion.

Anything you post anywhere on the internet is up there permanently, and out of your control

True. But what you post on eng-tips.com Pats’ Pub is available only to Pub members, eng-tips staff, and beyond that probably only available to governments and hackers. And it’s not likely that people who start out looking for information on electricpete or Peter WhatsHisName are going to end up trying to hack an unknown unadvertised eng-tips private forum to find that info. In contrast, what you post on simpliengineering Pats’ Pub is inevitably available to anyone in the entire world who has the skill to find their way to google.com. It’s a distinction worth taking note of imo.

I don’t see a problem with a carefully reasoned response to a [public] political discussion.

That is your opinion, not mine. As I said I won’t argue if you call me paranoid.

Many people have been embarrassed by their on-line comments years later. Typically it happens to famous people or to people who are suddenly/briefly thrust into the news spotlight.…. masses of people with access to google set to work looking for embarrassing things about them.

The comment in question may be perfectly defensible in full context of the conversation and at the time it was made. BUT the quoted portion that goes viral won’t include any of that context. I think back to comments I have made in the eng-tips.com Ahmaud Arbery thread, they are all about exploring nuance between various opinions/positions expressed as a way to flesh out ideas. If you picked out one of those comments on its own without showing the train of comments I was following up on, it gives a whole different slant. Further, there is a lot of new information which has come out on that case which changes all of our perspectives…. years from now no-one is going to take the time to explain exactly what information was available to me when I made a particular comment.

Pete, I can still see Pats’ Pub at ET, I just can’t post to it. It is public to view and invite-only to participate.

Yes, that’s a good clarification Latexman. But you still do need a link (or a forum number) to be able to view it. You won’t find that link or number on google or eng-tips.com. The only way to get the link is from a current or former pub member, which is how you have access to it. It’s not something someone is going to stumble upon by googling electricpete or Peter WhatsHisName. It’s not perfect, but it’s still a heckuva lot more private than here imo.

Further clarification. That’s true for the full site, but on my iPhone, I can navigate to the Pub thru the ET mobile site and see everything. I can’t post though.

That’s true for the full site,

I’m not sure your point there. Most parts of the eng-tips site can be accessed directly from google. Pats’ Pub cannot.

I disagree. I’m doing it now. I can navigate thru the ET site to the Pub, not using Google, and see everything on my iPhone. Log out and try it.

I disagree. I’m doing it now.

You accessed eng-tips Pats’ Pub from google? I doubt that. Google is the important thing to hide from imo.

I think you’re saying you were able to navigate to read Pats Pub starting at the eng-tips website… I agree about that and that’s another good clarification. But I’m pretty sure that you still have to be logged in as an eng-tips member to do that (otherwise google would have crawled to Pats’ Pub and indexed it already)

I can navigate thru the ET site to the Pub, not using Google, and see everything on my iPhone.

Log out of eng-tips on your browser and try it again. I predict you won’t get in.

In fact even if you have that link, you cannot get to eng-tips Pats’ Pub without being logged into eng-tips. At least that’s the way it appears to me.

Yes, I misspoke. I am logged into ET. But with NO link whatsoever I can navigate to Pats’ Pub and see everything. 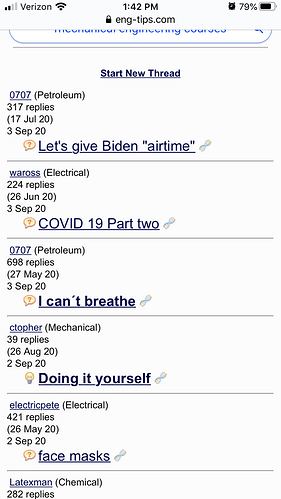 …So I should have added to the list of people who can view our posts not just Pub members but all full eng-tips site members. So that’s thousands of eng-tips members who could go and find my Ahmaud Arbery post IF they happened to be poking around (they couldn’t find it by search on google or by search on eng-tips). Contrast that to the few billion people who could potentially find my post here simply by googling electricpete. To me it’s still a difference worthy of note. What you choose to do with that information depends on your level of paranoia.

We should’ve read that and we would have got to the conclusion a lot quicker (anyone on eng-tips can view, but only when logged in).