I was presented with an interesting challenge the other day.
It started when I went out to look at a pressure washer. As I arrived, someone was replacing a fuse, and the problem was solved.
But;
“While, as long as you are here, we have another problem.
Our wind charger burnt up and we need help to install a new one.”
Off we went to a field 6 or 7 miles away.
I’ll first describe the system:
This was a cattle watering system.
Watering large numbers of cattle in an Alberta winter is a challenge.
In the summer, the cattle water at ponds or dugouts.
In the winter, everything freezes and supplying water every day is difficult.
Some ranchers go out every day and chop a hole in the ice so the cattle may drink.
This is labour intensive and a problem if the rancher is sick for a couple of fays.
every winter we hear stories of ice collapsing and cattle drowning.
This rancher had a unique system.
He had a well drilled about 90 or 100 feet deep.
The well casing was about 30 inches in diameter and stood about 30 inches high.
In the center of the well casing was a dish about 24 inches in diameter.
In the center of the dish was a water nozzle fed from below by a submersible pump.
The dish had drain holes so the water would drain back when the pump stopped.
On a nearby post was a motion detector, similar to the motion detector used for an entry light.
When the cattle came within about 80 feet of the well, the pump started and kept the dish filled with water until the cattle wandered away.
The pump was run off of an inverter fed by a 24 Volt battery bank.
The batteries were charged by some solar panels and a wind turbine.
They had assembled the wind turbine.
I connected the wind turbine and we set it up on the mast.
It started to turn in the breeze.
I checked the voltage before connecting it to the batteries.
There was only around 5 or 6 Volts.
When the wind gusted, it may go up to 7 Volts.
It was rated at 24 Volts.
None of the leads was grounded or shorted.
I hadn’t anticipated this and I didn’t have my DC current testers with me.
Do we have a manual? Yes, but it’s on a thumb drive and I was about 30 miles away from my computer.
I touched the lead to the battery terminal and got a thick, hot spark.
It looks like more than leakage current.
We took the turbine down and checked the wiring.
The wiring was correct.
The green wire was the ground wire.
Nothing was shorted.
Checking continuity across the leads, I saw high Ohms on both polarities. What I would expect from the DC side of a bridge rectifier.
I went home.
Now with access to the thumb drive I see that the turbine is self protecting and will short itself and stall in wind speeds above about 35 MPH.
Was it shorting? The wind was not that strong and the turbine was not stalling. When the turbine stalls, it should have zero output, not 5 or 6 Volts.
I suspect a shorted internal connection or shorted diode.
I am about to send an e-mail to the manufacturer asking for advice and asking for permission to open the unit up and check internally.
It cost over $2000 and I don;t want to take a chance on voiding the warranty.
I am waiting for word back from the manufacturer and the next time out, I will be taking my DC specific test equipment.
I am posting here as general interest. I will update as I know more.
Bill

What an ingenious cattle watering system! I’m definitely interested in hearing how things turn out.

Knowing the manufacturer and part number of the WT would help immeasurably with the diagnostics. The name windcharger was by many companies over the years making similar wind turbines, so it’s not really narrowed down yet. Does it have the “snowshovel” buckets or not? This sounds like a typical break-down in the field, not a product quality issue, so absolutely no reason to believe that giving specifics about the equipment would be seen as slanderous, and in 20 years of using internet forums for this kind of support, I’ve never seen anyone called out on it.

Without that info, the vague answer is that there still needs to be a diode between the WT leads and the battery, even if it has a DC generator. I will also assume that the machine is as simple as possible - usually the case.

Normally, without a diode reverse-biased in series in the circuit, the WT generator could act like a motor and drain the battery any time it wasn’t charging it. The diode may be built into the generator, and it’s my first guess that it’s burned out to short. That won’t short the battery, because it’s also in series with the motor, too. Instead, the generator is able to be a motor once connected to the battery, which as you know, takes a high inrush current until it reaches its running speed. So my guess is that the spark you saw was just an abrupt motor cut-in. If you had the turbine resting on the ground at the time, the blades wouldn’t have turned, making no evidence that you had briefly tried to motor it.

That’s the simplest explanation for what you saw. It isn’t clear if the diode/rectifier is separate from the generator or built in, or if the generator produced AC or DC before passing through the rectifier. It’s probably a DC generator, since most “real” windchargers are DC.

I’ll post more specifics tomorrow. I believe that it is three phase, with an added circuit to short the leads internally if the voltage gets too high.
I have just had time to read the manual quickly and will re-read it, but the action and the output don’t seem to match the description in the manual.
I suspect a shorted winding (pinched lead on a brand new machine, not a burnout). Possibly a shorted diode in the bridge.
I planned to supply more information, Spar,but this weekend is High School Rodeo and time has been short.
Will and his partner came third yesterday and 9th today, in team roping. This is their first times (legal catches) this season.

It’s an Air Wind Turbine from Primus Wind Power Inc.
24 Volts.
What I infer from the spark, Spar is that there is some fault in the unit.
I am not surprised to see a small leakage voltage when testing with a fairly high impedance meter, but the spark was much to hot to be high impedance, low current leakage.
More tomorrow.

I tried a link but it wouldn’t work.

Was it brought to the site assembled, on the bed of a pick-up, or trailer?

Were the blades free to spin?

Mint, as you described. Free to spin.
Laytexman, It’s a long way away. Pictures, yes, but not soon.

We’ll bear with you. Best of luck to Will.

I think that we may not have understood each other at one point. A shorted 3-phase rectifier can pass current through the 3 phase windings of the generator from the battery without shorting the battery. The generator’s winding resistance may be roughly 0.5 ohm, so a hot connection made by touching the wire to the 28V battery terminal will pull ~55 amps. That will draw an arc.

I had this very problem with my first wind turbine. The observations you describe are so similar to mine that I admit that I’m asking you to “prove to me that it isn’t”.

IIRC, a 3-phase rectifier block has 6 diodes in it. Only one has to be shorted for this problem to occur.
Of course, if 2 are shorted and there’s a path from positive to negative then it will also short out the battery - but that’s much more extreme than the case you’re measuring. That’s why I think only one diode is fried. 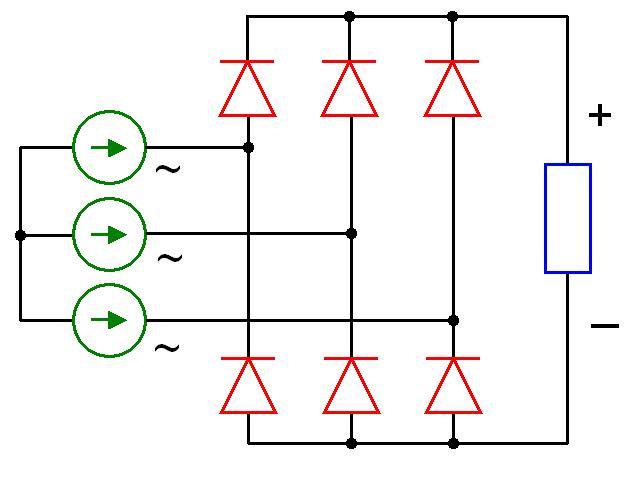 Thanks Spar. That is my thought also, not the entire bridge shorted but just one or two diodes.
With two healthy phases back feeding into a third compromised phase, they will develop a voltage that is dropped across the bad phase. That will load up the alternator and keep the speed and voltage down.
That would explain the 5 Volts, rising slightly during gusts.
This unit does has additional circuitry to the bridge rectifier.
It shorts itself if the voltage becomes too high.
The manual states that when the leads are shorted at the battery, the speed will be limited to a couple of RPM.
Remember, i was hit with this unawares. I did not have any of my DC ammeters with me.
There was a one page sheet available which explained how to put on the blades (nine screws) and how to clamp it to the mounting pipe.

The answers that I am waiting for are mainly warranty questions:
Will I void the warranty if I open up the unit?
Do I have to send the complete unit back to Colorado for warranty or may I identify and send back only the faulty parts.
Thanks for sharing your experience with a similar issue, Spar.

Bill, you mean you DON’T keep a spare o-scope and a solder gun in the back of that nice pickup?

I keep most of my DC meters in the trailer test box.
I had a reason to take the Yukon rather than the pickup even though the truck is cheaper to run.
I didn’t think to put the trailer box in the Yukon.

I was just joking.