Breaker Trips when I On the Garage Lights

My house is 10 years old. No problems with this circuit, or any others, until a couple weeks back. Before getting a Sam Adams out of the garage fridge, I turned the fluorescent lights on. I heard breaker # 12 trip; no lights in garage. 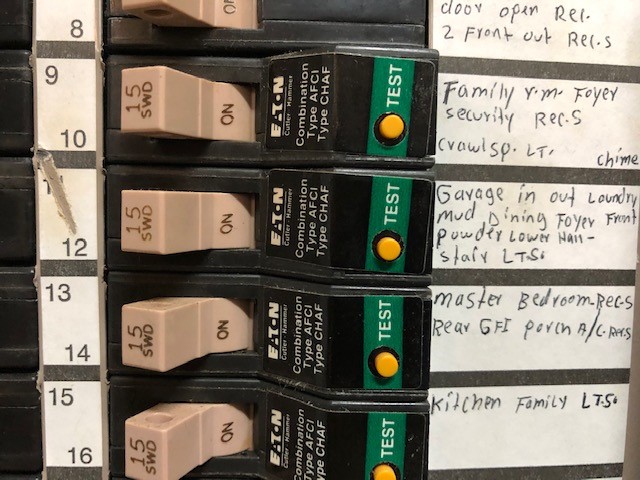 There are four light fixtures in the garage. Each has two, 4’ long , 6500k, 32 watt T8 bulbs. The other electrical loads on circuit #12 were off, as they normally are. I do not remember if the refridgerator was running or not. I do not suspect any water leakage into a circuit; it had been dry many days before.

I reset the breaker and everything works normally for a couple weeks.

Last night, same thing happened, and I still didn’t hear if the garage refrigerator was running or not. No rain in many days, so no water leakage issues suspected.
I hate intermittent problems!

I plan on turning off the breaker and checking the light switch and it’s connections in just a few minutes after I eat lunch. I’ll also replace any tubes that are not working or are partially dim.

My next suspect is probably the breaker, but maybe I should look in all the devices/junction boxes on the circuit first. Any advice?

I replaced two fluorescent tubes. One would not light and the other was very, very dim.

Next time I run out, I’ll pick up a replacement switch to have on hand.

Did I tell you, I hate intermittent problems!

Disclaimer: While I started wiring houses when I was 14 years old, I spent most of my career in the heavy industrial field.
However I am happy to offer some tips based on basic trouble shooting practice.
In order of possibility:
Possibilities:

The switch had a nice crisp action. I must have turned it on and off several dozen times while troubleshooting. No trip. The only thing that I took note of was when I pushed and pulled the red wire into/out of the screw-less connector, the wire did not feel like it slipped in and out of the clasp(?), but the whole clasp gave way a little so it appeared the red wire went in and out. Of course this all happened internally, so I’m going by feel and what I could see externally. That’s why I’m going to pick up a new, white, 15A, single switch.

I hate those push-in connections.
I have almost zero experience with them as I always used the screw connection and ignored the push-in feature.
I assume that this is the connection to the switch?
It may be well to check the connections in any Junction Boxes in the circuit.

Yes, all the connections use the push-in connectors. I’ll replace the switch when I get a new one.

If this persists after a new switch, and I have to drop the light fixtures to see the connections, I may look at some LED fixtures to replace them with. Much less power and longer life are appealing. I have no idea of the cost right now though.

Okay, $2.99, 20A Leviton Plus + switch installed. IMO, I went up in quality and duty from the original contractor grade switch.

Now it’s a waiting game for the next trip, or not!

those are arc fault circuit interrupters. I have never used or installed one yet but I have heard of numerous problems with them. They are supposed to trip if they detect a loose connection that causes any sparking, so many sources of electrical noise on the line can can cause a trip. The sensor circuits in the breaker may be bad.

I heard years ago, that one should not use a GFCI on an older fridge. Maybe that is the issue, or not.
But then again it could be the lights.

It has been trouble free for 3 years. The fridge plugs into a GFCI receptacle which is wired into the AFCI breaker.

No problem since changing the garage light switch.

So the change in the light switch happened before this started. Light switch’s are not that hard to change.

I’ve been meaning to look into getting those LED fixtures for my garage too. More light for equal power or equal light for less power, either way.

You can try changing to an LED bulb with the fixture you have. I tried some of those in both the 4’ tube type, and the edison base, and they work well.
I even have tried the 4’ tube type that you have to remove the ballist, and it works well.

You can try changing to an LED bulb with the fixture you have.

Really! Thanks. I didn’t know that was possible. I have about 6 more new florescent tubes still in the box. When I go through those, I’ll look into this.

Yea I still have a couple of the old bulbs myself. But that did not stop me from trying the LEDs in a fixture or two.
The T8 fixtures work well.
I had an old one with a bad ballast, and I used the direct 120V wire in for that.

No trips in the 4 months since I changed the wall switch. That must’ve been the problem.

1 year and 1 month and no trips from the new switch!

However, AFCI breaker # 12 started randomly tripping Saturday. It would stay on for 3 hours then trip, 2 hours then trip, 1 hour then trip, and finally it started tripping as soon as I on the breaker, which made it much easier to troubleshoot. So, I went through items on the circuit and turned them off and unplugged them. And, then, ah ha, the timer controlling the lights outside the garage is the problem! I turned that off and taped a note over the switch, until I find time to take it apart so I can get the info. needed to order a new one. With it off, the rest of the circuit is happy.

On second thought, why a timer? I changed the outside garage lights to LEDs when we moved in 5 years ago. They don’t cost much to keep lit. A combination exterior light detector and motion detector would mean I never have to adjust the timer again! I need to noodle this over some more. What do you guys have/recommend? More on this later.

I just installed a bunch of integrated color outdoor LED Philips Hue floods and a couple wall fixtures with discrete bulbs. Very cool system but not cheap. I have installed one motion detector to turn lights on to white full intensity for a few minutes then revert to previous state. The individually programmable colors and sequences are neat. Another cool feature of the hub is that you set it to your location and it will automatically track sunrise/sunset through the year to post/pre-empt the diurnal cycle. Probably more than you are looking for for basic light/motion though.