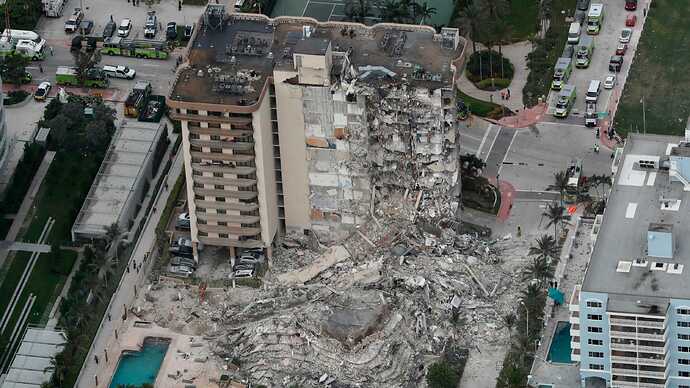 Part of a condo in Surfside, Florida, collapsed. Residents fled screaming for help; some were plucked from the building by firefighters on ladders.

Awful collapse occurred while most were asleep.

If so, this outcome is exactly why I will not use that type of construction - there are no alternate paths for loads to the foundation should a collapse mechanism develop. And, if it develops at any story, this happens.

So most never knew what hit them, literally… and I knew that housing prices were starting to go down, but never imagined this!

Saw this article too just now… Ill-Fated Miami Building Showed Signs of ‘Something Off’ .

Sounds like differential settlement may have had a part in the failure, along with irresponsibility and a head-in-the-sand attitude, local building department included.

Yeah. I saw the nearby security video that showed the collapse in real time. It looks like the failure initiated at the ground level based on the speed of collapse and pancaking. It looked like a planned implosion when it collapsed.

Yes, there has been a fair amount of settlement at this building…somewhere on the order of an inch or more post construction. If more and differential, the induced moments could be tremendous. Couple that with someone coming into the garage at 1:30 in the morning and hitting a column…could be.

Good article on settlement, Mike. Saw a lot in the article about not only settlement but also flooding & water damage. I can imagine 1990s settlement cracking and destroying concrete cover on substructure concrete. With the ocean near by, plenty of salt water (or even just salt air) available to accelerate rebar corrosion. Just a matter of time till something gives.
Pure speculation.

Incredibly, here is a video of apt 711 when the collapse happened. The lady had been there 3 weeks and just left yesterday, setting up a video camera as always. Lucky timing for her.

Apartment 711 video as it collapsed.

Just saw where the new missing total is 159, with 4 confirmed deaths. Not a good situation…

I was asked by our local news to provide some comments on the collapse. My interview is heavily edited but you get the gist in this clip… 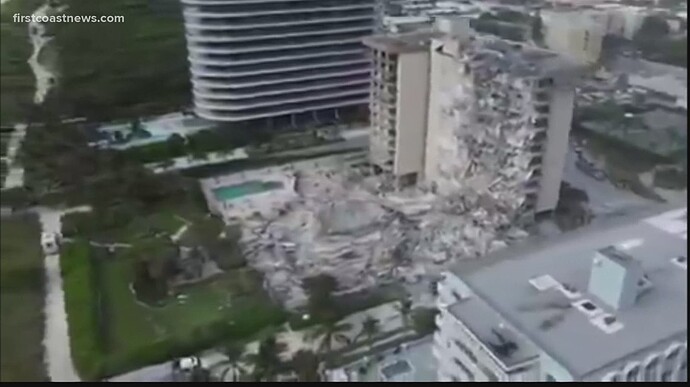 What caused the Surfside condo to suddenly fall?

What caused the Surfside condo to suddenly fall?

@Ron - Great interview. Seems I dimly recall collapse of one or more 1920s beach front similar buildings in the Miami area, maybe in the 1970s or 80s. The cause was rebar corrosion; sea water had been used for the concrete (no fresh water available at the beach in the 1920s, I suppose). If my memory is correct, those 1920’s building would have been about 40 years old at the time of collapse. Interesting parallel.

I know sea water would not have been used in 1981 construction, but perhaps coastal flooding provided the salt this time.

@SlideRuleEra ….I agree. I’ve tested a lot of concrete on the coast for chlorides and have designed remediation of corroded rebar on a lot of coastal concrete structures.

You’re right about the use of seawater for concrete. It was used for buildings and bridges early on.

@Latexman …
Yes, that’s important. It is another symptom of multiple issues that will likely come to light as the investigation gets moving.

This article is very interesting to me:

I’ll quote the part that is interesting, “Early Thursday morning, Mike Stratton awoke to the sound of his cellphone ringing. It was his wife, Cassie Stratton, on the other end, speaking frantically about their condo building shaking. She told him she saw a sinkhole where the pool out her window used to be. Then the line went dead.”

So, was this a traditional sinkhole as we know it, or did the slab under the pool deck fail catastrophically somewhat earlier (minutes?) than the condo and give the appearance of a sinkhole? My gut says the latter, because the pool is actually still there, though it appears it lost it’s water. Cassie must have been speaking of the pool deck area between the condo and the pool. Granted, she would have been in a panic with all that was going on at the moment.

@Ron Can you provide, or point me to, a theory/hypothesis, of why the rebar stripped out of the concrete is so clean? There are a lot of folks wondering about that.

@Latexman …
The building was post-tensioned, so a lot of what is sticking out are sheathed tendons. They are probably not corroded. When rebar gets stripped from concrete, depending on how fast it gets stripped and this was fast, it powders the bonded concrete and friction cleans the rebar a bit. The rebar that might have caused the failure is likely in the columns, not the slabs, so can’t be seen in photos yet.

This is a link to the 2018 Engineering Report (first document), the original 1979 plans (336 pages), and a good bit more: Champlain Towers Public Records & Media Information

I’m not sure the 2018 Engineering Report even addressed the lowest concrete (substructure).

Looking through the 1979 plans, I see the building is on driven 14" square “precast ( probably prestressed) concrete piles” driven to 50 tons bearing value. Prestressed piling should have no problem with sea water corrosion over a 40 year time span. Unless the piling were not driven correctly to start with, it is unlikely they “settled” in the 1990s. I would expect that settlement reported in the 1990s came from deteriorated concrete / rebar that supported the piling supported… perhaps the columns Ron mentioned.

General notes on concrete compressive strength are revealing, different values given on various pages of the 1979 plans:
2500 psi (Absolute garbage)
3000 psi (IMHO, inappropriate for use in a corrosive [sea water] environment.
4000 psi (For floors through the 8th story, with 3000 psi for floors above the 8th story)

About the the Contractor interviewed in the video just before Ron spoke. I discount every word the Contractor said. In 1981, the subsurface (piling) would have been just as saturated with groundwater as it is today… maybe saltier because of sea level rise, but not wetter. Ron’s explanation is superior.

I think it would be interesting to know where the sea/fresh demarcation region is along the pile, and how deep they penetrate.

Mike - Would have to see the geotechnical report to get an idea of pile driving conditions. Driving to a certain bearing value (50 tons) is a performance specification, not to a certain pile tip elevation. Bearing value is determined by using a suitably sized impact hammer with a traditional mathematical pile driving formula (typically, Modified Engineering News Record). Pile tip elevation can vary, usually not much in sand. Concrete pile are displacement (bulky) piling. They can work through either point bearing or skin friction (often a combination of both).

Close to the ocean, at the depth where pile would be driven, ground water is probably all brackish instead of a specific sea/fresh line. How brackish will depend on subsurface conditions.

I saw that the National Institute of Standards & Technology (NIST) will be investigating this collapse. They get involved only rarely, when the future risk to public safety is potentially overwhelming. This will be only their fifth investigation of a structural failure in their history.

@SlideRuleEra …thanks for the links…those are good.
As for the foundation, I agree completely. This is a common foundation system in the area and should have been able to achieve 50 tons/pile without much difficulty. The oolitic limestone formation there is very shallow and continues to deeper formations. You are correct that most of the interface with the foundation will be brackish as the interface with saline/non-saline will not be clear, nor is it an issue.

For those reasons, if I were doing the investigation, I would concentrate on the exposed concrete, particularly the columns and the observed deterioration.

Thanks, Ron. Please keep us up to date with any new developments.