In my much younger years as an engineer, we would many times design continuous beams over columns and have pinned splices placed just off of the columns, perhaps 3 to 8 feet away depending on spans. The splices were typically placed near the natural inflection points. Every engineer I knew back then (1980’s) assumed that the inflection point was a brace point and designed for the negative moment at the column with an unbraced length derived from the column-to-inflection point distance.

At a seminar in Texas one year I asked Joseph Yura (a guru of AISC stability design) about this and he said as long as you use Cb = 1.0 you should be fine. I also used 1.2 x Lb just to be safer.

A short time later I was informed that Dr. Yura had revised this recommendation to say that the inflection point shouldn’t be used - rather the full span of the beam (column to column distance) and the designer should rely on the calculated Cb number to “help” the design for negative moment.

All the above is preamble to my question. We recently checked a beam on an interior mezzanine and found that, using current AISC provisions, using the full span length, and calculating out the proper Cb, we couldn’t get the beam to work under its original design live loads. Thus, technically speaking, the original engineer designed a beam that doesn’t come close to working.

In our current project with this beam, we simply added a steel angle kicker to shorten Lb and make it work. But that got me to thinking on how many beams are “out there” that technically are not sufficient…including a lot that I designed.

It made me wonder if AISC ever put out a big notice that engineers may have messed up using the inflection point as a brace. I know on our current project that we could get the original engineer’s live load to work by assuming the IP = brace.

I don’t recall seeing any notice about that. Not only that, there were text books at the time which indicated the inflection point was a braced point. I am not aware of any failures resulting from that assumption.

I’ve not seen or heard of failures either. But AISC’s current specification implies that the beams don’t work that way, and would be seriously under-designed using the IP as a brace.

Yes, I remember many similar discussions over the years. My thoughts:

I think, however, if you applied the same practice to LRFD 2nd edition or newer, then it could be problematic because there are not as much built in conservative-ness.

I came across this snippet from Salmon and Johnson, Fifth Edition, p.450. Thought it might be of interest. 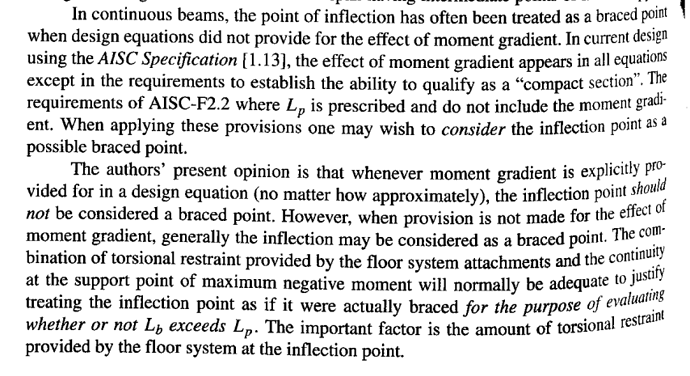 BA - what year was this?

I fail to see how a book published in the US could be imported to the US. Makes no sense to me.

I am attaching the cover of the download for your information. 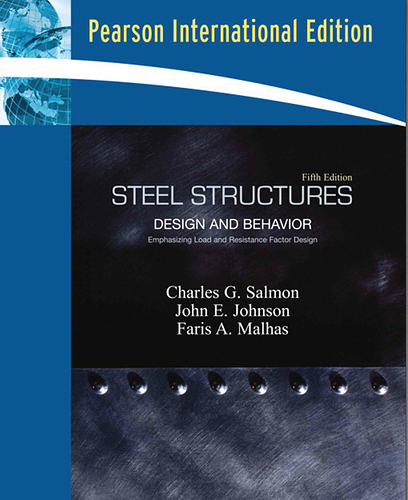 I think that the dustup over this issue is less about faux IP braced beams being dangerous than it is about IP braced points being fundamentally non-sensical. Sure, unexploited moment gradient and torsional restraint almost certainly would offset a BS assumption about IP bracing in most cases. That’s just not a rational way to design when we know better. It’s a bit like saying that you’re not worried about the electric bill this month because you accidentally over paid the cable bill.

About a year ago, several us did a monstrous amount of related work in an ET threat about “Fly Bracing”. Lot’s of tinkering with FEM buckling modeling etc. I don’t personally favor that as a production design tool but I feel fairly confident in saying that, were you inclined to do so, you could make most of these beams calc out with those methods if they would have calc’d out with IP bracing.

I’ve always found it interesting, and a little terrifying, that my first exposure to this issue was simply a RAM Sbeam checkbox asking if I wanted IP bracing. At the time, I brought it up with with my fifteen or so colleagues and it was a maelstrom of confusion and disagreement.