Most of my experience in runaway reaction relief is with emulsion polymerization reactions, which are “tempered” by the presence of water. Recently, a new business has come into our business unit whose runaway reactions are decompositions and are considered “gassy”. So, I have been learning their relief technology.

Some of the old (1980’s to 2000’s) journal articles on gassy reactions use discharge coefficients, C or Cd, to calculate discharge of fluid through a rupture disk. These days it is standard for rupture disk vendors to use resistance coefficient, K or Kr, to characterize their rupture disks. Therefore, I need to be able to readily convert Kr to C.

I did not find a formula to convert Kr to C directly in my favorite fluid flow reference, Crane TP 410 (2018 Version). So, I used two formulas to derive one, as follows:

I have worked in aerospace composites, mixing thermoset resins, since the early '80’s. While the mixers were equipped with rupture discs, these were not for exotherm conditions. Only low reactivity resins were mixed in large quantities (up to 2000 lbs.). Resins were catalyzed in 5-gal. buckets, 25 lbs. at a time. The catalyst mixers were next to an exotherm booth, similar in design to a large fume hood, which held 50 gallons of DOP (dioctyl phthalate). If a bucket exothermed, it was thrown into the tank of DOP and the solid steel door was lowered. The smoke was extracted by a large blower on the roof through a 24" steel duct.

The large mixers were never more than half full and, if an uncontrollable temperature rise was detected, a tank of DOP on the roof would automatically dump into the mixer. Before the automatic dump temperature was reached the operator would, if possible, open the drain valve and dump the mix on the concrete floor. This usually provided enough cooling so there was little smoke, and allowed the mixer to be cleaned eventually.

Keep in mind that that before there is any thermal decomposition, the polymer will be completely gelled into a hot rubbery solid and that gas is being generated inside this solid mass. Releasing pressure on this mass will cause it to expand and plug your vent line.

DOP is used as a plasticizer so it will blend with many resins, and it has a boiling point of 385C, so it will not tend to boil and add to the gas flow.

I found your discourse above on this subject fascinating!

Keep in mind that that before there is any thermal decomposition, the polymer will be completely gelled into a hot rubbery solid and that gas is being generated inside this solid mass. Releasing pressure on this mass will cause it to expand and plug your vent line.

Yes it will. Here’s pictures from two adiabatic reaction calorimetry test cells after the test: 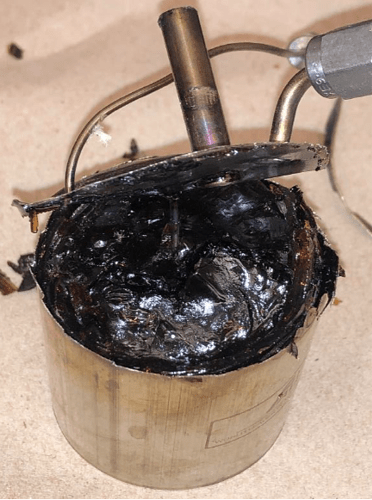 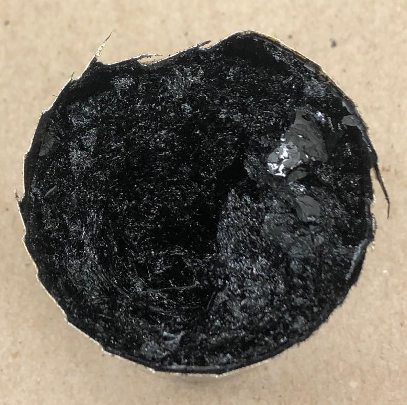 The test cells did not rupture during the test.

Finding that conversion was beyond clever.
You guys know anything about deliberate smoke generation?

I’ve used “smoke generating flares” to find leaks in a spray dryer and it’s ducts. If you need more info. start a new post with all the detail you have.