QUESTION
I am experiencing cracking in one of my injection molded parts. The part is plastic shell enclosure made with injection molded PC/ABS (Chi Mei PC540), the screw socket is cracking in both of the bottom bosses. The cracks appear between 1-3 month after assembly, they may occur in storage or in the field.

I have tried to simulate the cracks myself without any successes, I have identified that there is a small gap (~0.2mm) between the two enclosures so some tensile stress may be applied. The screw is a self-tapping type, the bosses does not show any singes of cracking, only the socket does.

Does anyone know how to test injection molded parts (not transparent) for stress / how to expedite cracking? Does anyone experienced PC/ABS cracking this way before? (No oily / other solvents are present in the assembly line).
Here is a photo: 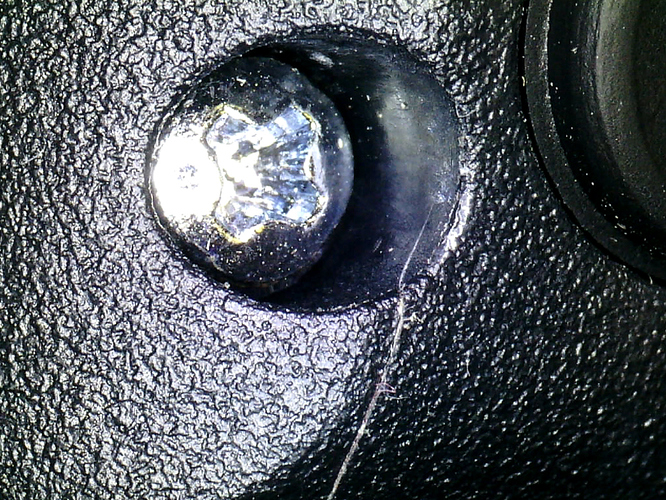 Nereth1
ABS may or may not be susceptible to chemical attack from hand lotions etc, but polycarbonate sure is. I have seen mass failures of parts with similar symptoms to yours made of a PC based material due to the wrong additives for chemical resistance being used in the blend. For the record, investigation found the material was susceptible to a lot of chemicals used in the production line, including the hand soap. This being a hand tool, it could be exposed to the same. Some pointers that may help you diagnose:

It might not be hand lotion, that’s just an example - many chemicals can cause this issue. Chemicals (paints, thinners, cutting fluid and oil, etc) can literally evaporate and deposit themselves from airborne onto PC and crack it. Although that would be an extreme case. The 0.2-0.3mm gap is closed by the screws I assume, in which case since it’s constant strain it’s difficult for it to cause an eventual crack, since stress relaxation will take care of it.

Constant strain: If you take a 100mm rod of plastic and stretch it to 105mm and clamp it there, in addition to any classical plastic deformation from overstress, it will also slowly molecularity reorganise itself and take a permanent set somewhere between 100 and 105mm. The longer you leave it at 105mm the closer to 105mm its’ length will be when it relaxes after you remove the clamps holding it at 105mm. While it is clamped, if you strain gauge up the clamps, you will see the force on them exhibited by the plastic slowly drop over time. It won’t likely break in this situation without something like chemical attack happening simultaneously, because neither stress or strain are rising.

Constant stress: Hang a weight on another 100mm rod of equal weight to the force your clamps that were holding at 105mm, and the plastic will immediately stretch to 105mm (as would any material). But wait a while, and the plastic will slowly flow and stretch beyond 105mm. The mechanism is the same as the relaxation in the constant strain situation, except the force never decreases so the effect we observe is a bit different. This will more often cause an actual fracture, as the plastic just keeps stretching until it goes, although the time period can be extreme in some cases if load is low enough.

If you are screwing two plastic parts together to a set position (gap=0 from gap=0.2mm) then that is mostly a constant strain situation, we wouldn’t expect to see a delayed failure in that case without something like chemical attack or other service loads (e.g. dropping it one too many times).

SOURCE
https://www.eng-tips.com/viewthread.cfm?qid=373227
Above is a snippet.