Ok y’all. My new job includes teaching E 101 (Intro to Engineering). We have both a 4 year degree that is heavily mechanical and electrical, which honestly I know nothing about but I don’t have to, and a 2+2 program with a big powerhouse university for any other majors.

Part of E 101 is student presentations on different types of engineering and specific topics within each type. Would y’all be so kind as to look over the list of topics I’ve attached, for any type of engineering that you’re knowledgeable about, and let me know if the topics are relevant or stupid? I inherited the list and I want it to be current. 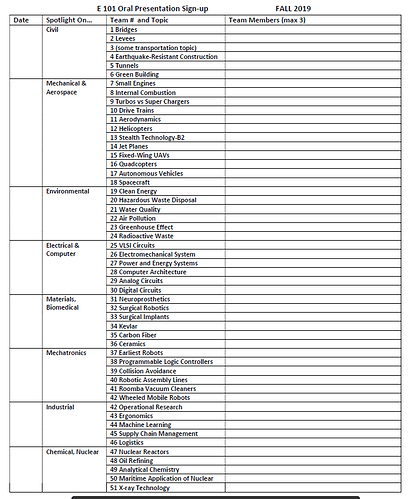 I went over your list, and, it’s pretty energetic. You may want to pare it down a bit to some basics and essentials. You might overwhelm the little critters. Lots of pictures… and maybe just touch on theory.

I should have explained better. There are about 95 students in the class, and they will be gathering into teams of max 3 to prepare a max 10 minute presentation on a topic, to give during class. These are the choices I’m going to offer them.

Good research for them, and that’s where the strength would be… but still a bit too energetic I think. With all the trees, it’s easy to get lost in the forest. They have to take something away from this collage of information. Some redundancy is part of the learning process.

It’s a great concept, though…

In the industrial section, I would maybe substitute out the “Ergonomics” for a “Lean”, or “Manufacturing Efficiency” topic instead. Or even call it “Manual Operations” maybe. Ergonomics can get bogged down from the intended engineering approach easily and I’d worry trying to skim over the basics in 10 minutes might not get to the intended goal for 1st year students.

In my freshman year, the entire class (120-ish students), broke up into groups of 4-5 of mixed disciplines and we had to give elevator pitches (90 seconds) to the rest of the class on project, development, or research ideas. The pitches were voted on by class and faculty and I think the top 20 were “approved for funding”. Those 20 continued past the pitch stage and faculty assigned teams to each project that conitnued on for the entire semester (and some for the entire year). I loved it and it was a great experience on team building and collaboration.

In the chemical/nuclear section, I personally would replace X-Ray technology with a topic related to the biologics/pharmaceutical industry. Perhaps the team could look into vaccine lyophilization or some other facet of bioprocessing? If I’m being fair, analytical chemistry could probably also be replaced but I am partial to chemistry so I want it to stay x)

Perhaps the team could look into vaccine lyophilization or some other facet of bioprocessing?

Thanks for that - I’ll look into it!

Lots of topics there that would make for good ten minute student talks.

In the Electrical/Electronics area, I feel Digital, Analog and Electromechanical are very broad compared to a lot of the other topics. Maybe something like “Electrical Energy Storage” would be possible.

There’s a lot of robots in the mechatronics area. How about “Actuator Technologies” or “Electrical control of non-electrical drives” (the title of that last one could do with a bit more work, but it’s a key industry area that doesn’t get enough attention at UG level).

Can you describe that a bit more? (I’m structural…)

And thanks for the great suggestions!

I was struggling to find a snappy title for what I meant. University education has plenty to say on design of the electronic signal processing element of control systems, but often forgets to teach about the sensors that create the electrical signal and (for a hydraulically actuated system) the valves etc that allow the processed electrical signal to influence the rest of the system. Either of those interfaces lends itself to self-study followed by a short talk that could be a lasting eye-opener for the audience.

IMHO, “technologies” are more suitable for a university course of study.

For #3, how about either human factors and roadway safety or the cost effectiveness of preventive maintenance? 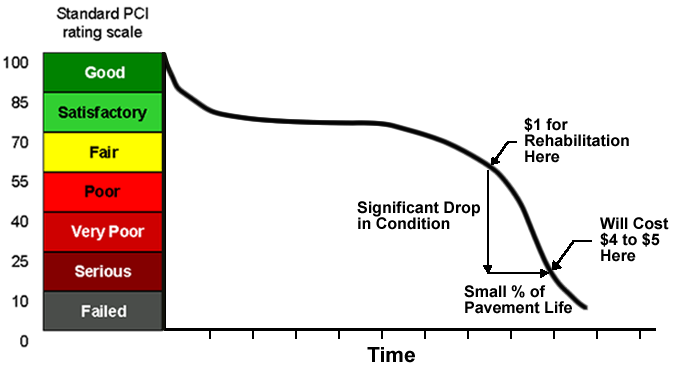 One topic to consider is crossover between engineering disciplines. When doing structural stuff with amusement rides I had to learn about signal conditioners, analog to digital converters and signal analysis to do dynamic strain measurements.

Hi SLTA,
How is the course going?
Were these subjects well received?

It’s going well! Thanks for asking. Some of the presentations are way better than others, as expected, but no one has said “this topic sucks” or “but I wanted to do x”. It’s fascinating to see how some of the folks obviously have presentation experience and some really don’t.

How about a topic suggestion for next year, under Aerospace, of course:

This would be better than “Stealth” because you’re going to get the same stuff about stealth every year as the students will keep going back to the same limited few sources.

I’m continually behind the curve on the new stuff coming out for aircraft guidance and navigation. After the Malaysian jet disappeared, continuous data reporting became a thing, and starting January everyone has to have ADSB. Next new thing is giving pilots headsets with enhanced vision which is going to be all the rage in China and India as their economies grow at the same time as their airports are obscured by smog.

I can also think of some ideas for other disciplines (civil has an opening on your list) such as Concrete Reinforcements (“beyond rebar”).

Or something multi-disciplinary, such as “Undersea Fiber-Optic Cables”.

That’s a great idea! I’ll do that next year.