Since we have a new section on SimpliEngineering, some of my research on DIY EV’s might be worth sharing.

I am still far from starting an EV build of my own. But I’ve been thinking about it (a lot) for many years. I’ve been collecting info from the major manufacturers, and from DIY sites like https://www.diyelectriccar.com/ and the “EV Garage”. I put in data from the battery pack size, motor power, range and so on. I was wondering how the DIY projects stack up against the major auto-makers. SURPRISINGLY WELL as long as we compare apples to apples.

To keep my info organized, I put it into a spreadsheet. That spreadsheet grew into several tabs with product comparisons of the various necessary things, like batteries, motors, controllers, etc. Soon after that I was able to make a performance prediction tab, where I could enter some basic goals (range and mass) and get an approximate battery pack and motor size.

I compared groups of EV’s, looking for trends and similarities, and I found many. There are four distinct types of pure EV:

Getting good, reliable data is hard. I have to rely on the claims of builders, but you know, we’re not all scientists. At the same time, we should not believe the range values from the OEM’s, either. BMW has been caught exaggerating about the i3. The old Leafs are disappointments. I’ve gone back and corrected claims made in the past that didn’t hold up in the real world. And if anyone finds any errors or would like me to consider something I missed, I’m all ears. There’s some scatter in the data, but actually a lot less than I expected.

Trends for each “technology” are definitely grouped. They also tell a bit of a story of technical progress as EV’s become more capable. Lead is obviously the past, and here’s a clear illustration of why. To get any range requires an enormous amount of battery mass, but soon mass of the the loverwhelm the mass of the car.

Hybrids (I’m not finished this part) can be compared to production EV’s as long as you look at the all-electric mode of operation. It’s really hard to get good information about the pure-electric function performance of some hybrids. I have to rely on magazine reviews in places.

Close together are the DIY and production EV’s with Lithium batteries. The production EV’s have a slight advantage, but there is considerable overlap. It is clear that the DIY builders have access to technology that is similar to the technology being used by the major automakers. Note that I haven’t included any DIY builds that use production vehicle drivetrains or batteries. That could be a 5th technology group but it might also have been confusing. So no DIY Tesla drivetrains in a Mazda Miata in these graphs, for example.

Then of course, there’s Tesla. They really stand out, although I must give a shout for the proud little Chevy Bolt which somehow slipped into the Tesla pack by these measures.

Overall, I am very impressed with what DIY EV builders can achieve. Their results can equal and in some cases even beat the major OEM’s, which is just amazing

Maybe someday I can join the club!

The external link I put in the first post doesn’t seem to work. Here’s the same file for download:

From the analysis, here’s a plot of energy usage (in Watt-hours per mile) versus weight (in pounds).

Some keen folks will notice the mixture of units - metric and US together. I’m not happy with it either, but the majority of cars I have access to are US built or imports to North America and most info is provided in US units. I considered doing more unit conversions, but it would be a lot of work considering how the spreadsheet is organized. 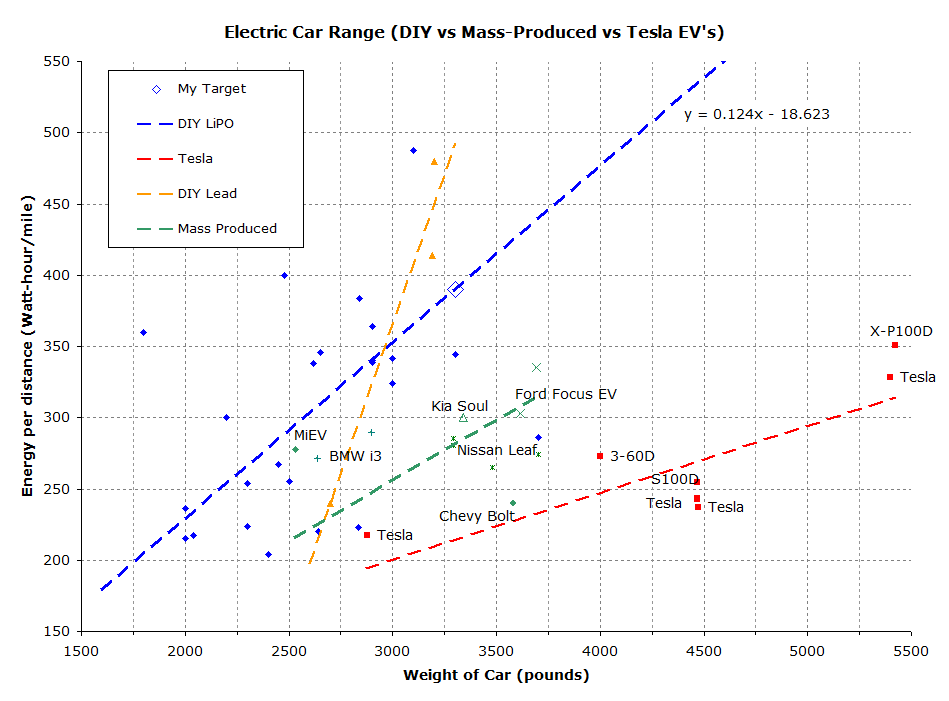 Also from the analysis.
Once again Tesla takes a class of its own. Not only do they occupy a category that has a much higher weight fraction and range, but the trend through that range is very different from the trend-line through the other cars. Why is that?

I think one reason is the battery pack. The Tesla packs are unique, and entirely designed for installation in the vehicle rather than the adoption of standard battery cell shapes. Thermal management is probably much better in the Tesla’s than other cars. Recent EV’s from other automakers are catching up to Tesla’s lead. If a look at their battery packs reveals that they’re similar to the Tesla pack, that would be a hint.

The DIY and production EV’s are pretty close together, and the hybrids seem to blend into the same trend too. This is where my assertion comes from - a “do-it-yourself” project that is well-prepared and well executed has a chance of achieving performance rivaling to the major automakers. 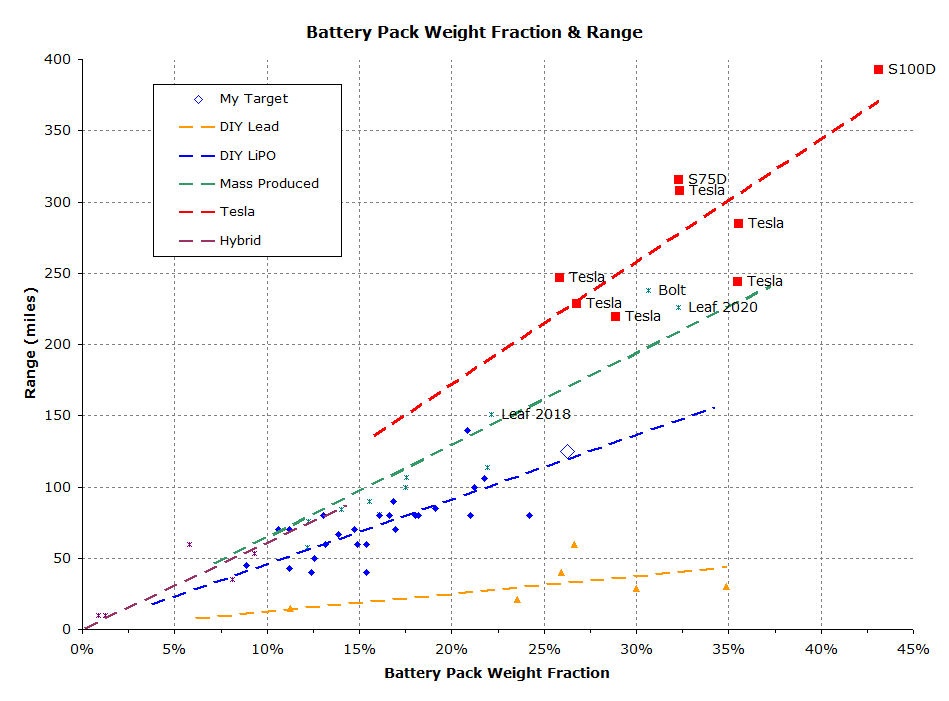 I think one reason is the battery pack. The Tesla packs are unique, and entirely designed for installation in the vehicle rather than the adoption of standard battery cell shapes. Thermal management is probably much better in the Tesla’s than other cars.
[/quote]

Is it true that Tesla’s battery pack makes the battery a partial structural member, rather than all dead weight? That, in addition to better thermal management in the battery pack design, means they can get more battery mass in the same space without having to add structural weight to carry the battery…etc.

Hmm. I don’t know.
The packs are rigid and self-supporting, but whether they structurally contribute to the body structure I don’t know. I would have to have a Tesla with the pack dropped out to measure and know for sure.

I have some reason to doubt because the big attachment fasteners in the 4 corners seem to have some “float”. A fastener isn’t taking up load if the bolt is shifting around the clearance in the hole.

Is it true that Tesla’s battery pack makes the battery a partial structural member, rather than all dead weight?

Short Answer: Right now, the battery is not a structural member of the car. Tesla (Elon Musk) has announced that will be changing. As of June 2021, it has not changed, yet.

Longer Answer: Tesla has a “Battery Day” each year when Elon Musk covers what Tesla is working on to improve their batteries. In 2020, September 22 was “Battery Day”. The announcement was made then. Here is the video of the entire 2 Hour, 11 Minute event.

Even though the batteries in current production EVs (not just Tesla’s) are not structural members of the car, they are designed with significant structural strength. A (modern) production EV’s battery is typically under most, or all of the passenger compartment. To provide occupant crash protection [in the USA, reference National Highway Traffic Safety Administration (NHTSA) and Insurance Institute for Highway Safety (IIHS) ] manufacturer’s design production EV batteries to withstand (intact) major impact.

Production EV batteries also have to be designed withstand other challenges , such as submersion (fully charged) in water, including (conductive) sea water.

There are requirements for things like how auto accident first responders can quickly (cut) battery cables to prevent anyone from being electrocuted, shocked, or starting a fire.

Despite all of these precautions, fires in certain model EVs continue to be a high-profile problem. No more often than with internal combustion vehicles, but can be severe and difficult to extinguish because of the lithium in batteries.

Interesting, thanks Spar and SlideRule.

I wonder how GM’s latest battery effort (Ultium?) is going to fall relative to the rest . . .

@SlideRuleEra
Thanks for the tip about the Battery Day presentation. Really gives you an idea where Tesla is going, and probably soon.

Just curious, why don’t you have a plot of Whr/(lb-mile)? 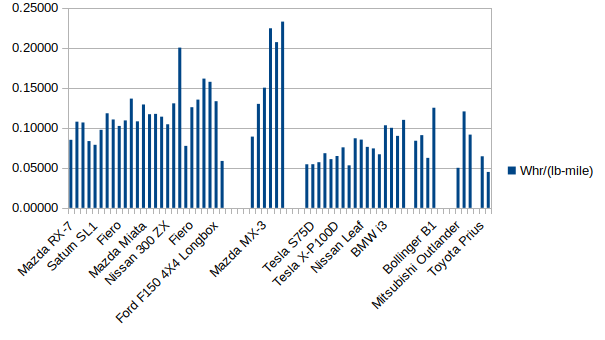 Just curious, why don’t you have a plot of Whr/(lb-mile)?

Because I didn’t think of it. Interesting idea - gives a weighted average (literally).

The plot you just made seems to follow the same order of the list I used, so the DIY Lithium projects are on the left, the DIY Lead is in the middle, and the production EVs are on the left, starting with Tesla and ending with some hybrids. I have added the same into my spreadsheet (home copy, will refresh the upload later).

I sure do remember. I hijacked that one for a little while with my own burning curiosities about EVs, but once Moltenmetal put the car on the road, it was his turn to shine!