Explanation behind theory of Bearing Capacity Equations for Clays

I have been doing a little background reading on the commonly used equations for determining a bearing capacity in a clay soil, and I have a puzzle I was hoping someone could shed some light on.

Back in 1951 Skempton proposed this formula:

This was subsequently modified a few times and a new set of formulae proposed in 1970 by J Brinch Hansen, where his general equation was:

And he also proposed a special form for a clay of:

Note he states that its is “theoretically more correct” that the constants are now additive and not multiplied as factors. This equation is also presented by Bowles (1997).

Now when I look at some of the more modern references such as Eurocode 7 (2013), the formula is now presented as this (same form as Brinch Hansen general formula): 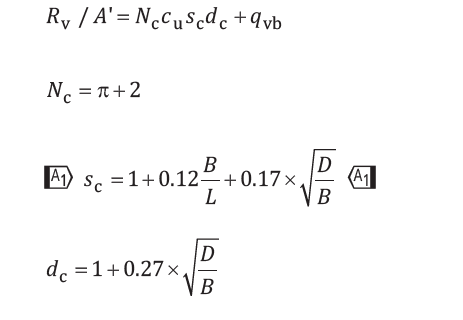 They allll present the bearing capacity equations multiplied with factors. Not the additive factors proposed by Brinch Hansen and Bowles.

It seems to me that the bearing capacities calculated using the additive or factor approach could be significantly different.

Would anyone know what the “theory” was J Brinch Hansen referred to when he suggesting adding the factors, and why that approach appears to have been dropped in the modern references (apologies, I don’t know any of the US codes for comparisons)?