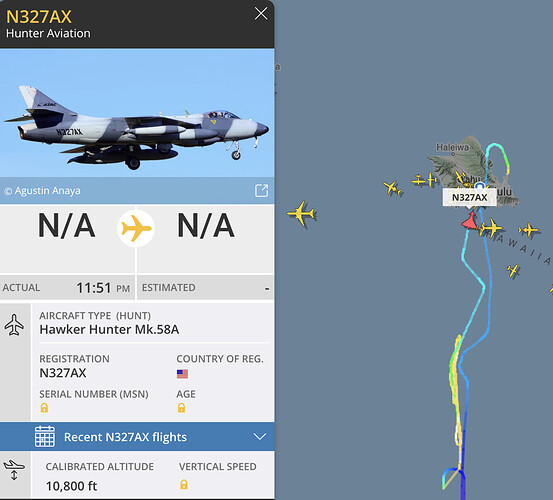 Saw a strange symbol on flightradar24 this afternoon near Hawaii.

It appears this aircraft has been around for awhile - a British post WW II aircraft.

My guess is the aircraft is conducting some test bed exercises or ?

The Obsolete Fighter Jet That Crashed in Hawaii Was Playing the Enemy Role in...

Very versatile aircraft. Used to be used for towing gunnery targets, to fly at very low level towards (occasionally) unsuspecting warships in the hope of being mistaken for an exocet and even to spray nerve agent simulant over troops undergoing NBCD training.

Flew in a T7 once - nowhere near as slippery as a single seater, but still not a bad way to be paid to spend an afternoon. I see the guy who was pilot that day is now flying commercial spaceships.

Somebody landed a Cessna on a highway just north of Toronto, Canada, and a friend of mine posted in Facebook about how scary that is. I replied to her pointing out the general aviation aircraft are regulated for stalling and landing speed. They can match highway traffic. As an aside, I noted that your Lockheed F-104 Starfighter will come down at around 200mph.

I got curious and I checked to see what is still flying. The company in South Africa that took you for rides in English Electric Lightnings has been grounded after an accident. There is a company in Florida that flies F-104s.

Have you seen the movie Top Shots? Those are Folland Gnats, possibly license built in India.

Now you mention it, we had a 2-seater lightning as well, but I never got anywhere near flying in that (to be fair, it didn’t get out all that often). Can’t think when I last saw a Gnat airborne. The Crimson Crabs flew them when I was at school, but that was an awfully long time ago.

It has a N registration number. Meaning it is likely a civilian aircraft.

US military aircraft are exempted from needing FAA registration, although in some cases they may have them.

This particular aircraft is owned by a corporation that appears to provide contract training to military pilots.
https://registry.faa.gov/aircraftinquiry/Search/NNumberResult
https://www.lortieaviation.com/home.aviation.htm

Yes, please note the aircraft registered owner in the snippet attached to original posting just below the registration number. thanks for the faa link though.

as aside, when floating the mouse over aircraft symbols not in “typical” aircraft space, sometimes they show up as military. especially at odd hours. most have been air tankers or C17 globemasters.

With almost any aircraft, you can type the ID code into Google and find out exactly what kind of aircraft it is, who owns it, and what it is doing at the moment. People have hobbies.