What’s the best way to fix: 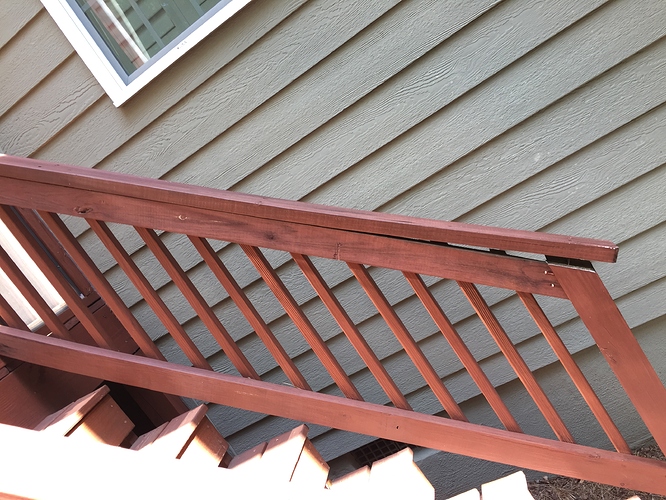 The nails have lost their grip.

Your railing and attachment is far too flimsy. Take a gander at some other railings that seem to work.

The other side works. It’s identical.

It shouldn’t… if it does, then it is not likely constructed ‘exactly’ as the failed one. The railing still looks flimsy and not capable of withstanding most rail loadings.

The top bent member might have a permanent warp in it causing extra stress on the nails. Could have been installed with the warp.

Try replacing the top member, and you might try using screws into the side grain.

Also, you should stop using the end of the top member to open your beers.

If you want to try resecuring the existing rail, pull it into place with a ratchet strap rather than trying to use the fasteners to do both “pull closed” and “hold closed”.

Options for “hold closed” in order of increasing aggressiveness:

Some really good responses. Thanks!

I lifted up the loose end until the two 10d ring shank nails popped out of their existing holes. They sprung up and landed about 1/4" above the existing holes and at a significantly different angle (virgin wood even though it’s end grain). Since I think the initial installation held 10 years (we bought 1 year ago), I decided to hammer them in at the new position/angle and see if/how long it holds. If it doesn’t, I think I’ll try zuesfaber’s #1 first (the wood is in good shape), but if that doesn’t hold, go with msquared’s new wood approach.

I suspect I’ll have to revisit/update this within a year or so. It’ll probably pull free again, but lets see. I may get lucky.

I’d add one or two long (maybe 6") screws down into the post. Yes, end grain doesn’t hold as well, but it will hold if you go deep enough. Your local big box store should have a good selection of timber fasteners that will fill the bill.

Yes, end grain doesn’t hold as well, but it will hold if you go deep enough.

You have to go deeper and put a nut on the end.