QUESTION
So we’ve got a a 3-4’ overhang all around. Not a big deal. Rim joist connection is generally pretty irrelevant in that it’s not really holding much (if any) load. EXCEPT for the part labeled (in red) A and B, we’ve got a floor to ceiling window, so I can’t put a header under there. That’s why I’ve doubled the 3 joists around the opening and then the rim becomes structural, picking up the ends of the joists that are no longer cantilevered over the window opening. So I’m wondering what the proper detail is for these connections? Generally web-stiffener and face mounted bracket for the single joists (I would think), but for the double joists the load is actually UP, so do you mount the bracket upside down? Is that even an approved Simpson methodology? Is there a better way to make these connections?

NOTE: The part labeled B is actually a bit different than A. In B I put a header in the roof over the windows because picking up that huge span seemed a bridge a bit too far for the rim. Of course that means that the steel post there in the corner that has to support two beams AND a triple I-Joist, all in the same plane is going to be pretty tricky.

So looking at the load charts I can probably get by with a BA or HB bracket nailed to the nines, but it still seems the RIGHT way to install this would be a lower capacity hanger installed upside down. I can’t find anything on the Simpson site that allows for this though. Any thoughts?

Here is a drawing of the cantilevered shed style roof: 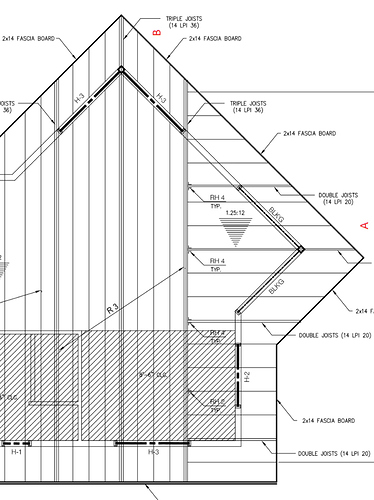 NorthCivil
I’m fully on board with the upside down hanger deal. Any connection capacity in the Simpson catalog should be valid in any direction, I figure.

If you wanted to get fussy, those 2 joists that land on the triple in the outside area, you could rotate 90, so that no gravity load will be imparted on the triple, which will load the upside down hanger the wrong way. (theoretically). in practice, this is probably negligible.

What piqued my interest more is your reference to “triple I joists”. I’ve never gone down that road, nor seen anybody else. Is it a valid solution? Seems a bit odd. Usually I’ll just spec an LSL/PSL/ built up LVL.

SOURCE
https://www.eng-tips.com/viewthread.cfm?qid=454557
Above is a snippet.