I am working on a 22-story building, primarily for an envelope renovation. The pertinent structural description is reinforced concrete frame, PT floor slabs and CFS infill exterior walls with portland cement plaster (stucco) cladding on gypsum sheathing. The design wind speed for the area is 119 mph (don’t ask why 119 vs 120!), but in two directions there is a fetch distance of over a mile over water.

The project was in litigation for quite some time, but eventually settled. During the litigation, I noted that there was more and varied cracking in the stucco on the upper floors. My thought was obviously more movement at the top. Independent of my observation, the occupants of the building (condominium) think there is a lot of movement at the top and they have asked that I measure that movement.

My thought is to perhaps use inclinometers at the four corners and two in the middle of the long side. Our only frame of reference is the building under no lateral load and we are not close enough to another comparable height building to obtain differential measurements.

Any other ideas to measure the drift? This will be done on a longer term monitoring basis since wind load events are hard to capture singly.

The occupants will have been using accelerometers (though they probably wouldn’t believe you if you told them so). I wonder if that’s an approach that could be taken more formally.

Although you’d need quite a high sample rate (natural peril of measuring the second derivative of the thing you’re actually interested in), a sensible triggering strategy should keep the data volumes within reason.

What about employing a computer guided laser system with graduated targets as needed on the side of the building?

Surveyors must have some instrumentation that could do this.

@zf…Yep. Human accelerometer. I did a lot of dynamic work back when I was doing a lot of amusement ride testing and sampling rate was one of the significant variables we had to play with.

@MM…would like to that, we just don’t have a tall enough building close by to give us a high enough target. I have not had good luck with our local surveyors on doing anything accurate above 2 stories!

I suppose we could mount 4 to 6 lasers at the top of the building and point them to targets on the ground, but we would have to protect them from the residents and the environment. Possibility though!

I like Zeusfaber’s suggestion to use accelerometers. Perhaps one way to make a first order confirmation of the “human accelerometer” reports is to take a suitable tablet (android or apple based) to various levels of the building on a windy day.

There seem to be several accelerometer apps Maybe one of these would be suitable.

Thanks, SRE…good suggestion on the app. We do a fair amount of remote monitoring for deflections (bluetooth gauges), vibration monitoring and a variety of other NDT applications. I will look at various accelerometers to see what works for the application.

Appreciate the suggestions from you and Zeusfaber! Thanks.

accelerometers may give rise to measuring uncomfortable motion, but, may miss total translation if the amount of movement is a measure of damage to finishes.

Is there a medium that can be used to track a laser beam, like photographic film? If so, it may be a matter of mounting lasers in each corner, say a foot or so from the building and pointing them vertically, with the tracing media at the base. The media could be protected by glazing. If stationary, you don’t want the laser to ignite the medium.

dik…this is similar to Mike’s suggestion, but hadn’t considered photographic medium. Will do a little research on this. For about 10 years I was an ASNT Level III radiographer, so familiar with large film applications.

I was thinking of mounting the lasers on the building at the top, maybe even on a gimble so they always stay vertical, just measuring lateral translation.

Can you mount lasers on the roof of your building. Cantilevered over the side and pointing down to ground level? Set the laser to plumb and target a known point, centre on a bullseye for instance?

Ussuri…exactly. The issue we have is the recording of movement on the target. Do you know of any laser targets that can capture and record the differential movement during a wind event. Since we cannot predict the wind event with any accuracy we have to be able to record with a time stamp. We will also be measuring the wind speed from different directions concurrent with the laser or other displacement measurements.

Nope, I am shooting from the hip here. First thing I wondered was thermally sensitive paper, akin to receipt paper. Leaving these on your car dashboard is enough to activate it, so I would have though heat from a laser would? Maybe? Doesn’t help with the timestamp though.

Some sort of digital receiver plate/target connected to a datalogger?

Could it be worth a call to someone like this?

How long a duration? Can you use a digital camera set on a time lapse? It may not get the exact max movement, but, should be close. Taken at 5 or 10 second intervals.

A digital clock can be included with the target.

Can it be measured by satellite? They are doing this for the Millennium Tower in San Francisco? I don’t know what the cost is, but the Paris, France organisation satellites can measure to 1mm.

Wow, dik…didn’t know that. Do you have a link or contact? 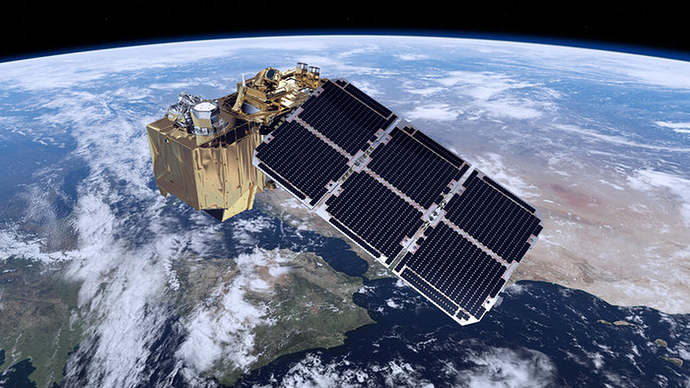 San Francisco’s Millennium Tower has tilted so much that the European Space Agency’s observational satellites can detect it from orbit. In truth, that’s more a testament to the sensitivity of the orbital technology than to the state of the building.

@Ussuri…thanks. I’ll call Thorlabs
@dik…long term monitoring, at least a year. Our wind events can’t be predicted well. We’ve had two tropical storms 2015 and 2017, but nothing of code level winds for over 50 years, yet our probabilities are always relatively high. In our afternoon thunderstorms in the summer, winds often reach 55-60 mph. That should be enough to cause some detectible movement.

While the satellite could detect a permanent set change, these movements are recoverable and wouldn’t show in such monitoring.

I don’t know the frequency of the readings, but, if the satellite is geosynchronous then they may be able to track the four corners.

@Ron:
The system might automatically be warmed up whenever the weather service anticipates strong winds, and then triggered by a rooftop anemometer at some local wind speed. The laser pointer should be on the ground and pointing straight up, thus, no need for a gimble system. The recording system is a 16” sq. flat, x-y grid pl. with zero x-y at its center, thus, 8” of drift measurement in any x-y direction. The movement of this pl. out of horiz. plane is proportional to the drift measured, but should be quite small (canti. beam tip slope of the bldg.?), so should be able to be compensated for is some fashion. I don’t know exactly what this flat measuring pl. is, but we can count pixels in their x-y location, so the laser target is electrically read as the pixel or group of four pixels being lighted up at any given second in time. This is all sent to a data recorder which can be downloaded every day.