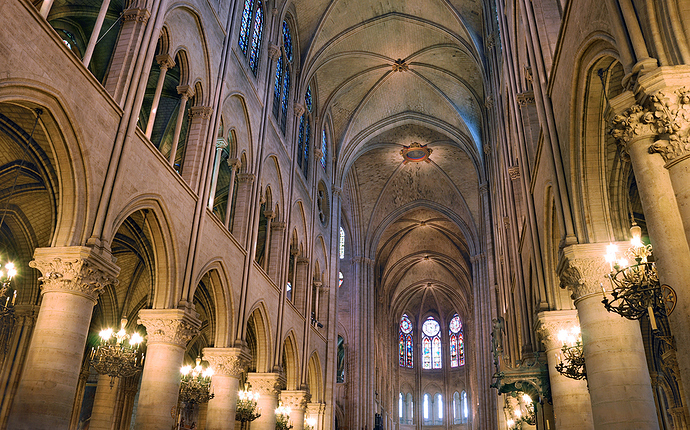 Paris’ iconic Notre Dame Cathedral is structurally unstable and urgently needs reinforcing according to an independent report by Paolo Vannucci, a mechanical engineer at the University of Versailles, in France. The report outlines the initial...

Paris’ iconic Notre Dame Cathedral is structurally unstable and urgently needs reinforcing according to an independent report by Paolo Vannucci, a mechanical engineer at the University of Versailles, in France. The report outlines the initial assessment of damage caused by the massive fire that destroyed the landmark’s spire and collapsed its roof.

Construction Canada is one of the best publications. It is at the top of publications I receive. Highly recommended. I just ‘discovered’ their website… have been reading their publication for over a decade.

I suspect Notre Dame was a bit of a ‘cash cow’ bringing in a fair amount of ‘tourist dollars’. There may have been some negligence on the part of the Vatican for not having sprinklers installed.

Let’s wait for the fallout here…

I don’t know what his credentials are, but, I know the publication is reputable. It’s likely that he is qualified.

I did all my undergraduate work in Hydraulics. My own experience includes the following:

In the late 60s, I wrote a 3D finite element program. (Computer Engineer?) My thesis was crack propagation in concrete beams due to torsion. In the 60s, there was little information on concrete in torsion. The ACI code at the time simply stated that it had to be addressed (1965 Ed, or earlier). Most of the information available on torsion, was either European or Russian. (Structural Engineer?)

I was talking to a doctor in the student union building (local coffee house) and he was having difficulty in determining the tip potential distribution with micro electrodes for neurological issues. I was able to model this with my 3D FEM program and it was a correct interpretation (Electrical Engineer?).

I was talking to a dentist in the student union building (the old one had been torn down and there was a brand new one) and he was having issues with amalgam fillings failing when they were pinned. Steel pins were inserted into the remaining tooth and the amalgam filling was placed around it. In the course of our discussion I found out that amalgam material had a very high compressive strength and a low tensile strength, somewhat like concrete. I asked him if the problem could be a fatigue failure due to the high tensile stresses developed at the junction of the pin and the amalgam. He was curious so I modeled this in my 3D FEM program. I spent all summer doing this and testing. Measurements were in the micron range and the only manner results could be compared was using statistics (to see if the results were in distinct families) (Materials Engineer?).

Another incident… I used to smoke and had an electric lighter. I was talking to an electrical engineer about how it worked and was informed that there was a piezoelectric ceramic called lead zirconate titanate (sp?) and that if deformed it produced an electric potential. The potential varied depending on the rate of deformation. The natural question to this was if you put a potential on the ceramic, could you cause the material to deform; the expected response was ‘yes’.

A few months later I was talking to a mechanical engineer who was having difficulty with bearings for turbines. These were high RPM machines, and I knew from the dental work that dentist high speed drills used gas bearings. I then modelled the bearing in a piezoelectric material and with feedback on the RPM changed the ceramic from a friction bearing at low RPMs to a gas bearing at high RPMs (Electrical/Mechanical Engineer).

It’s possible that this mechanical engineer has some structural basis.

I should have added that when engineering started, there were two types. They were Military Engineers and Civil Engineers. The latter has branched out to all the different types of engineer we currently have.

I understand, and his input may be valuable. My concern is that he might have started an emotional firestorm outside of his professed speciality that will not be able to be controlled with logic.

We’ll just have to see.

Thanks for you input and experience.

And, I was a military engineer, a civil, then structural too. Know them well. Love that demo!

I thought from him actually putting numbers to it gave it a bit more ‘truth’… I don’t know how, but analysing a cathedral would be quite an undertaking. I’ve followed some of the stuff that the University of Sheffield in the UK has done on stone bridges, etc., but not at all like a cathedral.

My big bugbear with that is that the Vatican has lots of funds, and they should be protecting their assets.

Much, much more complicated with the flying buttresses.

And it’s only been a month or so…

The way things are and have been going for the Vatican, they will have far, far fewer assets in the future.

I forgot that diddly little problem… it must be terrible being repossessed.

PARIS – The billionaire French donors who publicly proclaimed they would give hundreds of millions to rebuild Notre Dame have not yet paid a penny toward the restoration of the French national monument, according to church and business officials.

Instead, it’s mainly American and French individuals, via Notre Dame charitable foundations, that are behind the first donations paying the bills and salaries for up to 150 workers employed by the cathedral since the April 15 fire that devastated its roof and caused its masterpiece spire to collapse. This month they are handing over the first private payment for the cathedral’s reconstruction of 3.6 million euros ($4 million).

He said that “we are still in extreme urgency of securing the site.”"