SOURCE
https://www.eng-tips.com/viewthread.cfm?qid=374092
The above URL contains the entire discussion. Below is a snippet.

QUESTION
We have had some faults (last year like 3 in total 60 equipment) due to a diode failing in open circuit. It is on top of a DC control circuit just after the MCB, and has the function of avoiding reverse supply to upstream circuits.

The diode is 3A RMS and after checking we have seen some of them fissured, but not failed yet (see pictures). The diode is sized for the current but we can not discard some incorrect maneuver in maintenance or transient that could be causing an overcurrent.

As an example, we have a similar diode in other older equipment but sized to 10A (with exactly same control circuit downstream) that has not given problems in 8 years.

Before changing the remaining to the 10A one, I would like to check some of your opinions about the possible causes of package fissuring. My previous idea was that the most common fault mode for a diode was short circuit 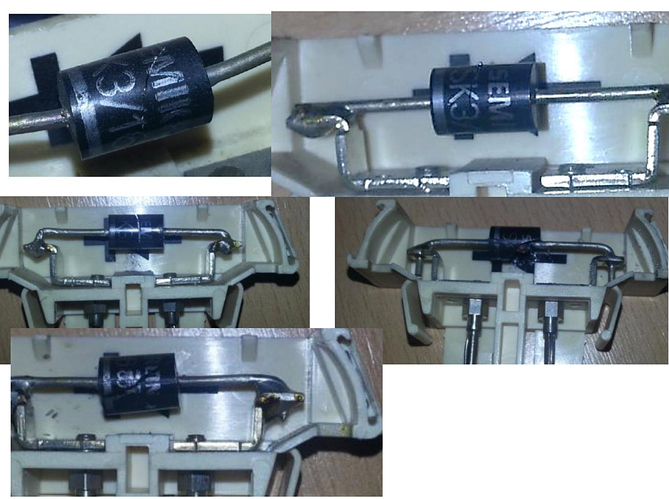 Comcokid
Silicon diodes fail in short circuit. To fail them in open circuit there needs to be a pulse big enough to blow them apart.

I will speculate based on my background in structural failures, not electronic ones:
The fissures appear to be helical in most of the photos. This hints at a torsion (torque) on the item that existed at the moment of failure. Is it possible that the diode legs were twisted around during their installation? Once soldered in position, the torsion stress would remain permanently, and once the diode gets hot the jacket softens. You refer to current spikes, so are there temperature spikes, too? Heat flow takes time to get from inside to outside, so a spike raises the internal temperature faster than the outer surface temp rises, thus raising the stress due to thermal in-equilibrium.

Agree, SparWeb. Some type of strain relief (longer legs on the diode, or an S-bend?) might help keep the part from seeing thermal stresses.