QUESTION
We recently installed internal floating roofs (IFR) of the full-contact type in two new 150,000 bbl. regular gasoline tanks (145’ diam. by 56’high). The IFRs were hydro tested per the request of the client. They were floated to the tanks critical height with successful results. After a couple of months of the tanks being in operation, we are seeing wet spots of gasoline at two locations in both tanks. The wet spots are on the sketch panels near the ATG ladder well and the other in the panel were a gauging cone is located. These are the panels with the largest perforations, and of course they do have a seal. Here are some observations:

We are consulting this issue with the IFC manufacturer, they claim they have never seen this type of situation. We think two things may be causing this issue: (1) either operation is injecting somehow air in the inlet line, from transfers or from the vessel, or (2) the product temperature near the tank shell is higher than in the tank center and thus is near or at the boiling temperature causing vapors to sip through the ATG seal or through the panel drain hole. We continue to monitor the situation to fix the problem.

The ATG and gauging cone penetrations are at 36" from the tank wall. Both are at 180 deg. apart. Here’s the IFC section drawing. The panels are actually less than 4" thick. Jamming by an obstruction is hardly possible, but by thermal expansion could be a possibility: 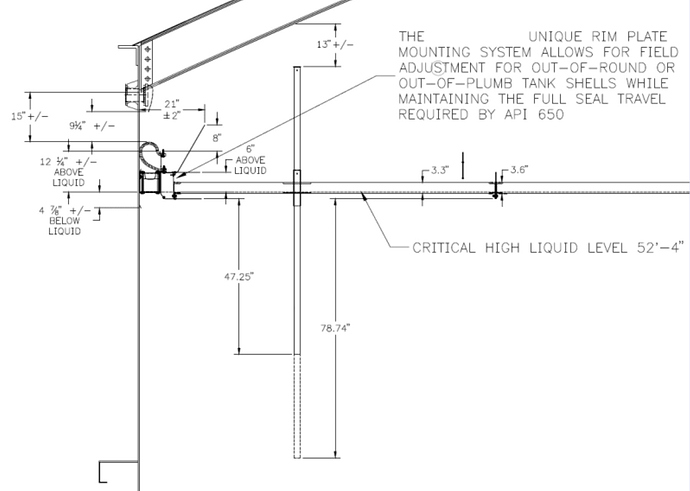 The IFC is made of aluminum 3003. Panels are hollow with a 0.023" thick skin, no honeycomb style. Prior to fill the tanks with gasoline, client insisted on hydrotesting the tanks once the IFC were installed. They were in contact with water for more than 60 days, from filling up to emptying, although we cautioned them about corrosion even after 4 days of contact with water. A temporary cathodic protection was installed to mitigate corrosion on the IFCs during the hydrotest. Here are pictures of the ATG and the sampling cone. It is basically a “giant pontoon”. The IFC manufacturer claims that that it is designed for a buoyancy 5 times of that required by API 650. There is nothing inside the panels, other than aluminum extrusions to provide support. These are NOT honeycomb sandwich panels: 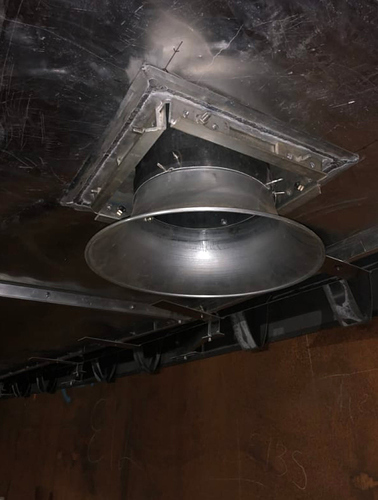 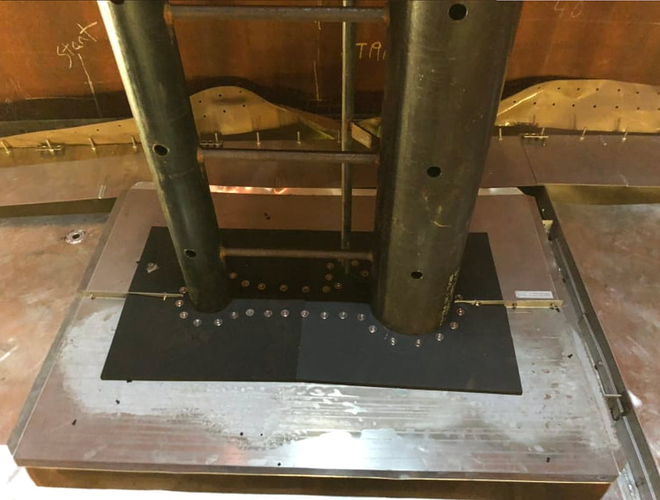 Thoughts on what could be happening? Thanks in advance for your input.

IFRs
This type of roof is not very common. Did you buy their first ones? If the manufacturer has not seen this type of issue, they are also new to floating roofs. You spent a lot of money and have a right to be at least a little disappointed in the performance of the product and the failure of the vendor to help.

Not a root cause, but your buoyant depth is somewhere between 3.3" and 3.6", not 4" as some have suggested.

There are really only two reasons for liquid to be up on the deck - the deck is floating low in that area and/or there was turbulence (during the initial fill, pigging or blending activities)

You’ve got plenty of buoyancy overall. The seal is a truly unique one that I have not seen in my 42 years so I can’t comment on its friction but that does not make it a bad one.

From your description, I’d suspect one or more of the following:

SOURCE
https://www.eng-tips.com/viewthread.cfm?qid=458330
Above is a snippet.