I looked at a CMU wall the other day that was leaning. The roof structure of the building consisted of bowstring trusses and the subject wall was an exterior wall parallel to a bowstring truss. The spacing between the wall and truss was about 20’. The CMU wall is about 11’ in height from the interior floor to its top. The wall is 100’ long and was relatively plumb near its ends, which makes sense since the corners stiffen the wall. Away from the corner, the wall leaned more and more, about 4.5 degrees and was worse at the middle third. The wall hadn’t been painted in a long time per the owner and there were no cracks in the mortar joints or CMU…essentially the wall appeared to rotate as a unit.

The rafter from the adjacent bowstring truss came down on an angle and bore on the CMU walls…No anchorage just set on the wall. Furthermore, there was a mansard roof system that the maintenance personnel said was “bolted to the exterior CMU wall”. from the exterior, there is a short section of flat roof between the angled rafters and mansard. I’m thinking that the thrust from the rafters and weight of mansard caused the wall to rotate as a whole…It’s possible the footing rotated but I personally don’t think that contributed much, at least at this point.

Wanted to get people’s opinions on what they think caused the leaning…I am debating having the soil excavated to verify foundation conditions, and more importantly what are options to repair/stabilize the wall? I want to avoid anchoring any members to the top of the wall and tying back to bowstring truss, since they are fragile to begin with. I thought about installing some steel WF sections against the wall and have horizontal WF sections along the top of the wall to brace it but they would need to be tied back to something for that to work. The other option is installing vertical steel from the outside to support the leaning wall, but at that point it might be cheaper to replace the wall in sections. but that all depends on how the mansard roof is connected to the CMU wall. 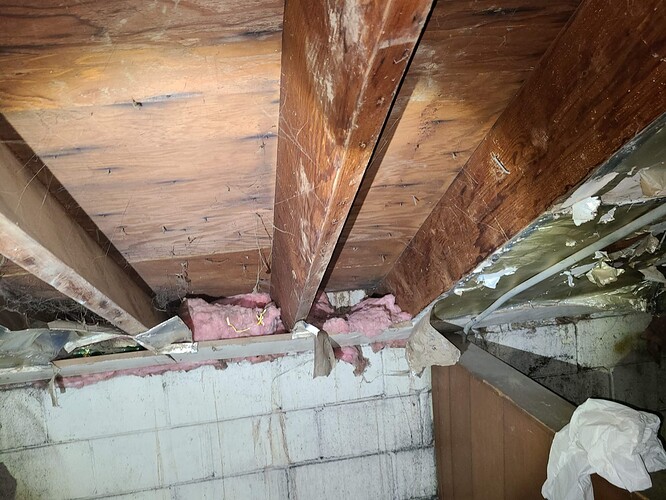 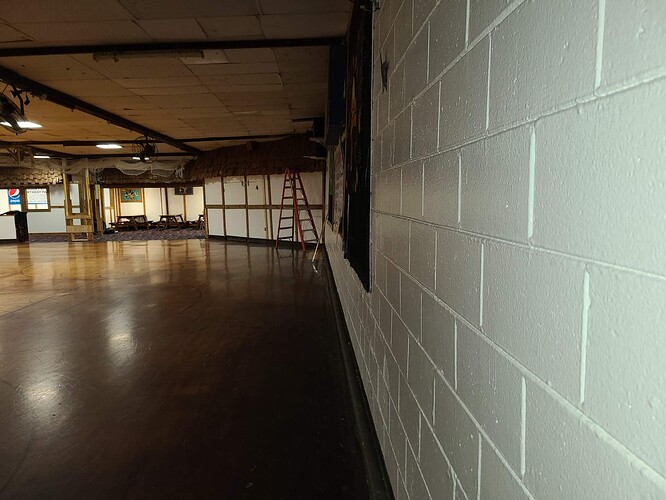 a swag, but noticed the snow on the roof. any impacts from the snow?

has this “lean” been there since construction or recently noticed & investigated? no cracks may suggest the lean has been there a long time(?).

a suggestion (you may have done this already), use a laser to determine deflection/displacement movement of the wall at various heights between the 2 wall ends, any deflection in the floor, and between the roof and floor at various locations along the wall length. heck, just have a laser scan done; these scans are economical these days.

When the snow melts, the wall may move back a little, but it is unlikely it will return to a plumb position, particularly if the anchorage of the rafters is weak. The leaning masonry which occurred when the roof was loaded with snow creates an eccentric moment, preventing the wall from returning to plumb.

I’m just re-reading your post. Are you sure the wall is leaning a maximum of 4.5 degrees? If that is correct, the top of an 11’-0" wall would deflect outward by 10.4". I don’t see evidence of such large movement on the photos. Was that a typographical error, or am I misunderstanding your post?

Bowstring trusses, huh? Well that is another topic for another day…

But I was wondering if there is any “movement” in the CMU wall at the other end of the truss from the one of your concern?

I am wondering if you are seeing the effects of a shortening of the truss and tension to the wall created by a change in temperature? Has the building been continuously heated?

I see evidence of water intrusion too and possible rodent infestation. Have you checked the connections at the truss ends to see if they are failing?

Is there any soil retention against the CMU wall?

Is there any evidence of the Bowstring trusses failing at the lower chord connections or splices?

Has the roof diaphragm been weakened by water intrusion affecting the chord ties along the CMU wall?