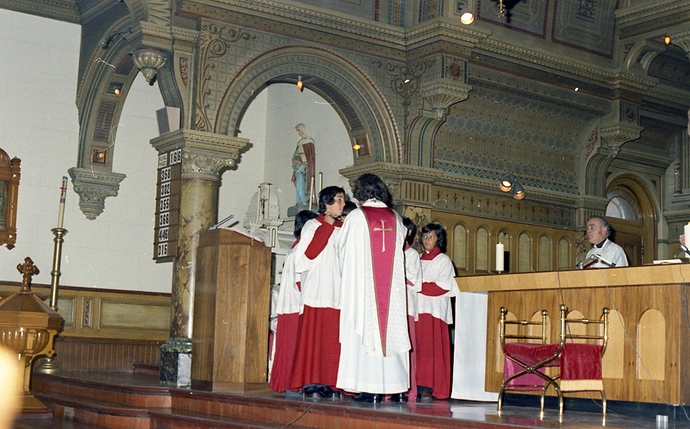 Lots of photos of projects, and, many are somewhere in the ‘past’… Found an interesting series of films from 50 or so years back… one of my drinking buddies was being ordained as a priest… and I took the photos at his ordination, about 6 spools of 36 exposure. Alan has since left the priesthood and has also passed away…

The church the ordination took place in was the oldest wood church in original condition in western Canada. Vandals burned it down about 30 years ago. The photos show the magnificent interior… I’ll attach one to show…

I couldn’t use a flash… so picked up an 50mm f:1.0 lens for the Nikon F2… I also taped the ceremony… I was really lucky, the Church had video and sound, but, it failed… I had the only pictures and sound.

I’m using an Epson V550 Photo scanner… other than being slow, it works like a charm… I don’t know where the bottleneck is, but, not my computer. The attached picture is directly from the negative without any additional processing…

How did the scanning process go?
(I’m assuming you are farther along or maybe done by now).

More details about that old church would also be appreciated. Architecture, etc.

The scanning went well… I ended up scanning all my 2-1/4 format negatives, too. A lot of fond memories… I found pix of my kids on the old 50cc Suzuki motorcycle I bought for my nephew that I’d forgotten all about… Stu gave him the bike for Christmas… the only time my dad was really p*ssed at me… Stu and I nearly lived on our bikes and Jason was only 5 when he received his gift. Christmas night, my wife and I dropped over to Stu’s about 10PM and Jason was in the back lane running up and down the ruts in the snow.

Also found pictures of our kids with one of the box kites we used to make. In each spring, I used to build box kites to fly… Used to send them up about 1000’… can’t do that today.

As far as the Church. I took the negatives into a photo shop to have them professionally scanned and put on a DVD. I made a copy (several now) and gave the DVD and the negatives to the local diocese archivist. The archivist could store them better than I can, and, they would only further deteriorate. I’m still missing the first film I took. Before the ordination I photographed the interior of the church using a flash. The pictures showed all parts, the basement, the balcony, and a couple of small offices. The church as you can see, was beautiful. The archivist only had a few pictures of the interior.

@SparWeb There are nearly 100 or so pictures (of thousands) that I want to re-scan at a much higher resolution and touch up. The scanned files are only a few meg each… Some of the higher resolution scans I’ve done are 30 or 40 meg each.

Have just been busy of late, with engineering work, and will have to wait… maybe this winter. I’m really impressed with the Epson V550 scanner, and maybe purchase a ‘bigger’ version; it does a fabulous job, as you can see from the Church photo

I ask because I have lots of old film, too, of course. All of mine is 35mm. I’m not too sentimental but maybe as I get older…

@SparWeb I had several hundred colour films in 35mm and a couple of hundred in 2-1/4. I realised my 35mm colour negatives were deteriorating and losing their sharpness. That’s what prompted the scanning. I also have several thousand films of 35mm black and white in a cold dry cardboard box. When processing them I used archival methods, so the negatives are likely not an issue. I used to live with my Nikon F2… still have it and dozens of lenses… I don’t know if I took the pictures of the Church with it or my Nikkormat.

Interesting story about the Nikkormat… I was climbing out in BC and fell and landed on it… I had to send it back to Japan for repairs. About 30 years later, I had a persistant cough that wouldn’t go away and the doc took x-rays and there was a bit of ‘cloud’ in my lungs. Checking further it turned out to be a splinter of rib that had been broken off. likely due to the fall 30 years earlier. I don’t have a ‘bucket list’… I’ve done most things I wanted to do and many things I just fell into.

I found lots of neat building shots and many projects that I’ve forgotten all about and don’t recall them. These include a 3 storey ‘walkup’ in Dauphin, Manitoba using HC floors… likely the first application of ICF formwork in Manitoba done in the early '70s… long before ICF came to be popular.