Is anyone interested in comments or discussion on the fate of the Ever Given? It’s the ship wedged in the Suez Canal:

Let's Talk About That Massive Ship That Got Stuck in the Suez Canal—and Why...

Hey, YOU try dislodging something that weighs 200,000 metric tons.

Yes. They’ve tried digging it out and pulling it out for 2 days. Now they are going to try dredging it out. They really don’t want to offload containers because they have no infrastructure out in the middle of nowhere.

I thought, helicopters! But the largest payload helicopter, the Russian Mi-26, can only lift 44,000 Lbs and a container can gross up to 67,200 Lbs. So, Houston, we have a problem!

The should have other large craned vessels they can use in close proximity to offload the vessel. The problem, though, will be the height differential.

May not have to remove all the containers to float it on a high tide.

If nothing else, start chucking the containers into the sea and recover them.

The vessel is far more valuable than the cargo right now. The cargo is expendable in my opinion, especially considering the impedence to traffic created.

The article said a sand storm (low visibility) and high winds caused the incident. I lived in Dubai, UAE in 1991-1993 and experienced several sand storms. Once you are in the storm, and you can see it coming from miles away, visibility quickly becomes an issue.

This article has good pictures!

An interesting problem. Wonder how much fuel and ballast she has aboard, and if it could be offloaded temporarily to barges without compromising stability? I saw photos of the suction dredge being deployed, but that will take awhile (will have to make several trips to dump the spoil?).

I expect that the dredge will pump a water mud slurry ashore continuously.

I read the article linked above. Non-technical question: Does anyone know why the ship name is Ever Given, however on the side of the ship is “EVERGREEN”? 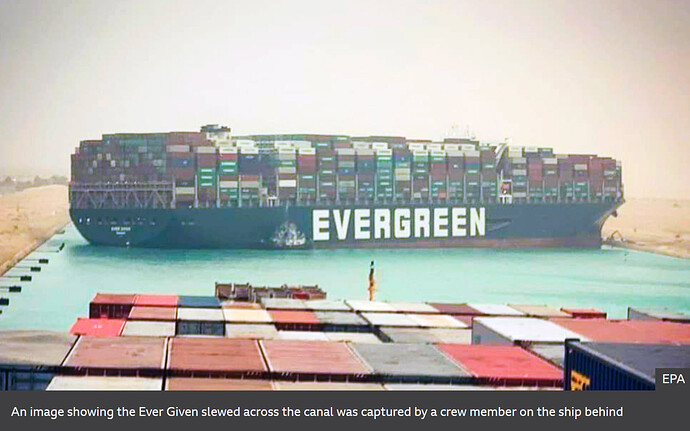 The name of the ship blocking the Suez Canal is the ‘Ever Given,’ not the ‘Evergreen’.

If you stood the Ever Given on end, it is taller than the Empire State Building (not including the spire). :)

Expressed another way:
The Ever Given is just 7 ft 8 inches short of 1/4 mile.

Is this incident a sign that it is too big for the Suez canal? In my naive mind, is there too much area in the wind, versus keel in the water?

@Latexman , you are dead nuts on. It’s like the structural engineer responsible for a balcony failure. They did not design for a high school grad party to be crammed onto their hotel balcony jumping up and down dancing! Take those active weight loads and start doubling, tripling???

Engineers messed up here. Someone should pay for bad ship design.

Another is that engineering is about about understanding the balance between risk and benefit to the point where you can optimise it. Maybe being able put 10% (made up figure) more cargo through the Canal is worth the cost of one total constructive loss (speculation) and closure of the Canal to all traffic for 30 days (made up figure) once every five years (made up figure).

Nobody has died and there’s been no appreciable pollution. If they keep the heid, there’s no reason it shouldn’t stay that way.

The SCA publishes limits to permitted draught, length, air draught and beam in the expectation that shipbuilders will build right up to those limits. They then mitigate the risks by requiring every ship over a certain size to undertake a manoeuvring trial for them before it passes through the Canal for the first time. Whenever beam winds greater than 10 kt are forecast, the beam restriction is tightened by 44 ft.

If anything comes out of this, my guess is it will be a small change to the current Canal Authority rules on the the use of bow thrusters which, to me, are currently biased too far in favour of minimising the risk of bank erosion.

Invecting Scottish “heid” into the matter will likely be very constructive. :)

I am starting to think that there are too many CYA bureaucrats involved and not enough cowboys.
Compare suction dredges with prop wash.
From one picture, it appears that the dredge is not discharging onshore but simple spoiling back into the canal about 1/4 mile away.
Concerns about bank erosion caused by bow thrusters suggest that the canal banks are vulnerable to prop wash.
We waited for the dredge when a tug at each end could have been directing the equivalent of 50 to 100 tons of prop wash to removing sand.
When that prop wash hits the side of the ship, it does not stop, it goes around.
The onshore excavator can not do much directly but it is capable of trenching around the bow so that prop wash is able to pass and erode from the top down as well as from beneath.
While a direct comparison may give the dredge the edge, the time factor, the tugs were there and the dredge was not, and the fact that tugs could have been working on both ends simultaneously suggest a lost opportunity.

Using tugs to topple containers into the canal sounds like a good way of increasing both casualties and pollution, while making the salvage job even messier than it is already. Don’t ignore the cost and time of removing a couple of thousand 40 foot boxes in varying states of buoyancy and structural integrity from a confined waterway where you’re still working to refloat 20,000 TEU of box ship.

Or is the idea to topple them “out of the environment”?

Containers are very strong. Consider the weight on the bottom containers on deck.
Containers are buoyant and the doors are well sealed.
One small tug may easily move a lot of containers away from the Ever Given.
Old school safety:
Where are the containers liable to land?
Don’t be there.
How to get them out of the way and away?
Link them together and tow them.
In the glory days of west coast log booming, this would have been a short log boom.
This would be so much easier than trying to clear them out of the way on land. 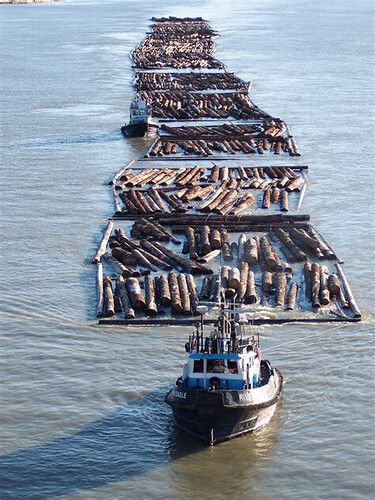 Suez Canal reopened after Ever Given cargo ship successfully refloated

Ever Given under it’s own power again. Finally!

Ah, you are right WaRoss, it looks like they pumped the sludge up onto the shallow water/embankment.