High Efficiency motors (IE3 and IE4 in Europe) make three phase asynchronous motors more efficient. Yes. But only when they run at optimum load. And then, you still do not gain more than a few percent efficiency - simply because you are already so high that much more isn’t possible until you get into an over-unity situation. Which some MBA:s may think is a good thing. But I am not an MBA, so I stay out of that kind of discussions.

What is optimum load, then? Most catalogues say either around 3/4 of rated load and others say “somewhere in the 65 - 80% range”, which is the same thing. That is good. But what happens below optimum load? I have been looking at the numbers and found some interesting data. 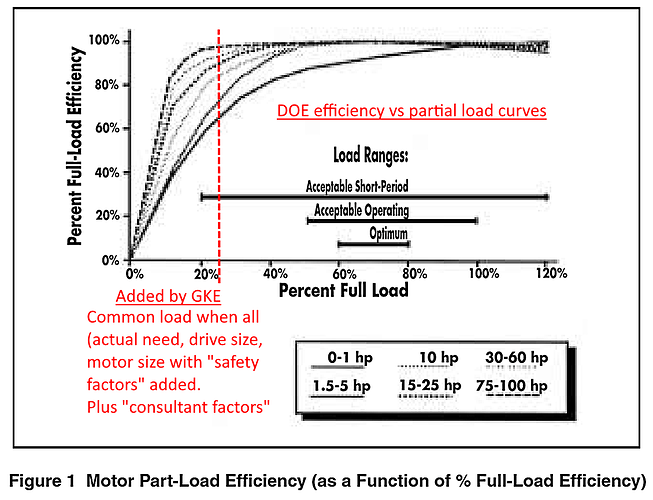 All safety factors multiply. And the result is quite often that motor load is as low as 20 - 30 percent. Which means that The Holy Efficiency goes down the drain. A “Green Company” has most of their 11 kW motors running at around 25 percent load. There are VFD:s, of course. And all filters you can think of. That doesn’t improve efficiency the least.

I told them to go to 5.5 kW motors and was almost thrown out of that job. But I insisted and they now have one motor running at the high efficiency they thought they already had. Saves them a lot of money on that motor alone. Keeping the VFD and the filters makes it an easy matter to change to a larger motor if that need arises. Which I think never will happen.

What is your experience with High Efficiency motors (and MBA:s)?

Horrible when you try to replace an obsolete pre-IE3 motor with something that’s still on the market, and your space envelope is inviolate and tiny. .