This Weather is Awful! 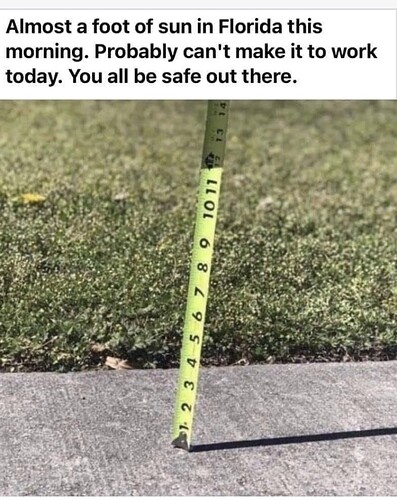 SWMBO is having cataract surgeries this month (one eye) and next (the other). After that, I can’t wait to get back to our FL condo for a while!

Had that surgery a number of months ago, and at the same time I had my lenses corrected. I am very happy.
The part between the surgeries is sort of odd, in that one eye is good, and the other you can’t see very well.

What! No pond hockey?
Locally;

Typical Seattle area weather still happening - the 12" of snow from last week is rapidly melting in 40F rain, and the lowlands are flooding…mountain passes are closed for the last few days, and the current plan has them closed through the weekend, apparently they can’t keep enough plow drivers healthy (non Covid positive) to clear the interstate…got a spare bunk down there, John? LOL.

We woke up to 2” of dry powder snow this morning. It’s somewhat rare for us to get an accumulation of snow. About once every few years. So, it was a welcome sight.

Unfortunately, it melted this afternoon, and will refreeze tonight into . . . black ice! It’ll repeat this for a few days, until it totally dries up / evaporates away.

On Monday, I ordered a Men’s Whaleback Waterproof Jacket . The initial delivery was Friday. Great! Then, the weather happened. UPS is saying, “Severe weather conditions have delayed delivery”. They will not give a new estimate; all they say is, “On Its Way”.

It must really be snowed in! It’s coming out of Hodgkins, Illinois, SW of Chicago.

We had a little weather here last Monday.
Me wife left for work and phoned me that she was caught in a whiteout and didn’t know whether she was on the road or not.
I went out with the truck and found her and led her to work.
Then the storm cleared up and conditions were good coming home.
I had a 10:00 am appointment to have some prescriptions renewed. I left early with 45 minutes for a 30 minute drive.
The storm attacked me with a vengeance.
At times I was in a complete whiteout. I would be stopped on the highway waiting for the wind to ease off so that I could see to move.
I times I steered by looking down at the roadway through the side window to keep on the road.
At times I could not see the ground.
The news later reported the winds as up to 75 mph.
About 30 miles south, someone was moving a house. There was a picture on a social media of a fairly large house sitting in a field.
Fortunately for the driver, the truck and trailer stayed on the road.
Conditions improved slightly. I could cruise at 10 or 15 mph.
Then I hit a drift across the highway. Stopped me dead in my tracks. I engaged four wheel drive and still could not move forward.
I was able to rock the truck back and forth and finally break through the drift.
I didn’t realize that rocking the truck had packed snow up around the front of the engine ans stalled the accessory drive belt.
I carried on at about 10 or 15 mph.
The next drift slewed the truck to the left and it headed towards the shoulder.
I stepped on the brake to stop and nothing happened.
It felt like sheer ice. Fortunately the shoulder was not steep.
I came to a stop just off onto the slope of the shoulder.
Even in four wheel drive the truck would not move forward or backward.
I called AMA.
The nearest wrecker who was answering his phone was 100 miles away.
He stopped twice to pull cars out of the ditch on the way.
He arrived and easily pulled my back onto the road. I almost coasted into his truck.
No power brakes and no power steering.
With the belt stalled and slipping the hydraulic pump wasn’t pumping.
That’s why I was not able to stop and stay on the road.
Eventually the belt freed up and My power assist returned, but I could tell by the smell that I needed a new belt.
I finally got to my appointment, 3 hours late.
3 hours and 45 minutes for what is normally a 30 minute drive.
I picked up my prescriptions and headed home.
Then the dash warning came on, “Service Exhaust Fluid System. 202 KM until reduced speed.”
So I headed to the GM dealer. That’s another story that lasted until Friday. It gets more expensive.

Now that was wicked weather!

I was in a whiteout once. In my younger days I coordinated a group ski trip to Snowshoe, WV every year. Snowshoe is upside down. The lodge and accomodations are at the top of the mountain. This year there was weather, and the ski lift dumped us out at the top right into a whiteout. Bitterly cold, howling winds, snow going sideways!. We formed a human chain linked by ski poles and started walking towards the lodge. It got so bad no one could see. Thoughts of, "I could die here’ entered my head. Then, the lead guy literally ran into the building! He yelled out, he’s going to side step to the right until we find a door. Luckily, he did, and we did. Once inside and in the lodge, eating hot food and drinking adult beverages, we figured that usual 1 -2 minute walk took us about 20 minutes.

Ugh. Whiteouts on skis give me severe vertigo with nausea. Had to sit one out with a squad of 5-7 year olds once, back when I was teaching on the weekends. Fog and blowing/drifting snow combined, couldn’t get my brain to figure out up from down, visibility was bad enough I had the kids make a chain like you described, Latex. When the conditions cleared a bit, I had us move as close to the treeline as possible so we had something to reference, and it helped. We made it to the bottom (very slowly) and I had to hand over my class to another instructor, and go sit for an hour or two in the lodge.

Even colder yesterday morning than the last time I posted on this topic; woke to -33.9° C on the weather station . . .

Had miles and miles to go, wanted to take the VW Touareg T3 TDi diesel; pre-glowed it three times before even cranking it, tried to start it, no go; two more glows, still no go, battery getting pulled down . . .

Boosted it with the kept-in-the-garage Jetta: two more glows and a crank, considerably more energy evident in the crank, and it started - with a great deal of protest, but it started.

Apparently if I hadn’t begun using anti-gel in the Diesel fuel a couple of weeks ago, I should not have expected to get it started at all under those conditions.

In summers during High School and College, I worked at an ice cream plant. The two Hardening Rooms were kept at -40C and the air was blown around fast! And, they bought us cheap Army Surplus coats and gloves. I hated the end of the month when we took inventory. We were in there for a few hours. We could only stand 30 minutes at a time before a warm-up break.

If the blowers were off, you listened carefully, and you spit on the floor, you could hear it crack shortly after it hit. That’s cold.

I somewhat know what you are talking about. In the summer in Highschool I worked in an ice plant. The rooms were cold (maybe not that cold). I worked in the storage room, between the bagging machines and the loading docks. While the bagging machines worked most of the time, there were times between the loading of trucks that they had to move the trucks (one would fill up, and they would bring an empty one).
The trucks had freezers, and we would fill them, and the next day the drivers would take them on route.
The truck loaders could stack ice twice as fast as the baggers could bag them, so we would add to the conveyers from the stacks.

I worked at a restaurant at a ski area when I was very young (below driving age). One winter evening we had a truckload of food to unload, some of it to the walk-in fridge, and some to the deep freezer. It was bitter cold outside (-10F?), and we were working in shirt sleeves with a large garage door open…we took turns taking breaks in the walk-in fridge, it was the warmest spot.