We’ve had three small earthquakes today, about 20 miles north of Charleston, SC. A 2.0 and 2.8 at midday and 3.3 about 6:20 PM. The 3.3 was centered about 5 miles from our house. I heard and felt it outdoors, wife heard and felt it indoors. I know these are trivial compared to where some of you are located, but we still pay attention to them. Historically the Charleston area has a major quake every 500 years, or so. The most recent was in 1886 (estimated 7.1) What we get now, are thought to be after shocks… or fore shocks of the next big one. We do carry earthquake insurance on the house.

Just go with the flow…

But realize he and I both live near two (three?) active volcanoes, near a body of water that gets periodic giant tsunamis from offshore mega-quakes in the subduction zone out west of here, or mini-tsunamis on the nearby lakes due to massive landslides from smaller kilo-quakes (just made that term up, it’s smaller than a megaquake, but still big, see?)

Interesting. You made me look at historic earthquake events around Raleigh, NC. Since 1874, there hasn’t been an earthquake recorded within 60 miles of Raleigh. I also saw an older map that went back to 1698, and saw no event there either. I had no idea it was so stable here.

Thanks, Mike & Ben, that is really good advice, I’ll do it. We are in a “high risk - low probability” situation for earthquakes. Had not thought about it, but we do what you are saying with hurricanes.

Latexman - Looks like y’all really are low risk, and from your research, low probability, too. 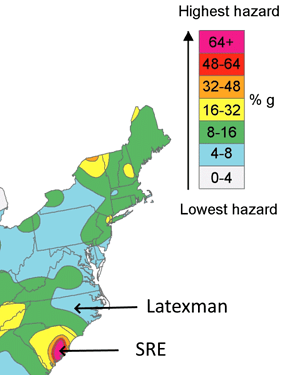 If the New Madrid ever ruptures again, being to the north and east of SC, you could get a pretty good shake in SC.

A 5.5 in the Puget Sound region is really not much due to the local geology, but not so in the Midwest where the damage will be much more, again due to the geology.

I regularly get reports of earthquakes 6.0 or over worldwide from the USGS site. I ignore anything less than that just because of the sheer number of quakes worldwide, except in the area of volcanos where I take note.

I do have active volcanoes to my Northeast (Mt. Baker), my East (Glacier Peak), and to my southeast (Mt. Rainier). Closest is about 40 miles to the east in Glacier Peak, but the prevailing winds are to the east, so we will not get much ash fall unless we have winds from the east.

It’s true that the ground is stable in NC. It’s just that the people are not… They wobble at the slightest shake…

If the New Madrid ever ruptures again, being to the north and east of SC, you could get a pretty good shake in SC.

I’m sure you’re right, the 1811 New Madrid quake was felt in Charleston:

This powerful earthquake was felt widely over the entire eastern United States. People were awakened by the shaking in New York City, Washington, D.C., and Charleston, South Carolina. Perceptible ground shaking was in the range of one to three minutes depending upon the observers location. The ground motions were described as most alarming and frightening in places like Nashville, Tennessee, and Louisville, Kentucky. Reports also describe houses and other structures being severely shaken with many chimneys knocked down. In the epicentral area the ground surface was described as in great convulsion with sand and water ejected tens of feet into the air (liquefaction).

Also, they were shaken by the 1886 Charleston earthquake:

“Shaking from the earthquake was felt from Maine to Florida and as far west as the Mississippi River, covering an area of more than 5 million square kilometers. The earthquake — estimated to have been at least a magnitude-7 event with an epicenter near Summerville, S.C. — was the most powerful and destructive in recorded history to strike in the southeastern United States.”

I was in Columbia SC for two weeks in 95/95 weather back in ‘78. Glad to leave, even with the AC…. Imagine having an earthquake that cut power during that weather!