QUESTION
Merlin Gerin book states that TT system isn’t allowed to supply places with high fire risk, but doesn’t give any reason, is there any? On the other hand, why TN-C is not allowed in a risk of fire? 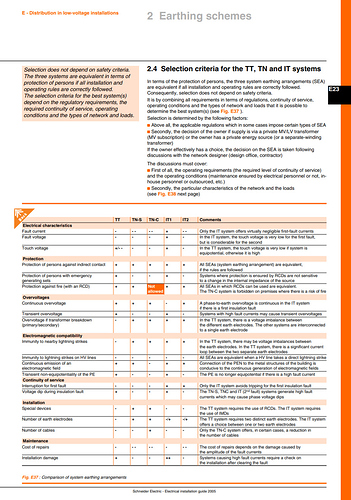 Kiribanda
On a TT system if earth fault protection is provided by residual devices such as Current Operated Earth Leakage Circuit breakers (ELCBs/ RCCBs) with 30mA trip threshold then there cannot be a fire risk. But if you provide earth leakage protection by overcurrent devices then there can be a fire risk because the earth leakage current may not be enough to trip the overcurrent devices unless
you make sure that the “measured” earth fault loop impedance is less than 1666 OHMS to satisfy the allowable touch voltage of 50V per IEC for 30mA threshold.

Due to high earth fault currents RCD devices are not allowed in TN-C systems. Per IEC60364, in a TN-C earthing system the earth fault current is taken back to the source by the PEN conductor in contrast to PE conductor of a TN-C-S earthing system. That means at each utilization equipment, the N terminal has to be bonded to the E terminal. With time if this bonding develops a high resistance to the earth fault loop impedance then, the tripping time of the overcurrent device during an earth fault will be longer (more energy is released at the fault point) and it might create a fire within the installation. Therefore, at installations or buildings where there is a fire risk, TN-C earthing is not acceptable.

SOURCE
https://www.eng-tips.com/viewthread.cfm?qid=373577
Above is a snippet.